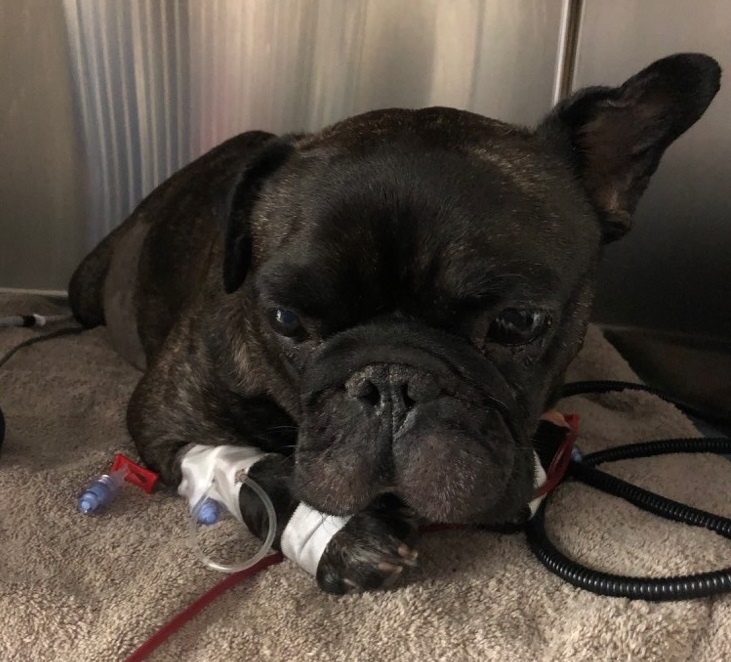 Specialists at a leading small animal hospital combined to solve the case of a French bulldog which found itself in a dramatic downward spiral after suffering from a rare case of a twisted spleen.

Little Gus was lethargic and vomiting when he was initially examined by emergency vets, who also discovered he was acutely anaemic, with an abnormally low amount of red blood cells, had fluid in his abdomen and an enlarged spleen.

Gus was stabilised in emergency care overnight before being referred to the Linnaeus-owned London Vet Specialists (LVS) in Belsize Park for expert analysis of his unusual symptoms.

Senior staff at the London small animal hospital then joined forces to conduct a multi-disciplinary series of tests to identify what was making Gus so ill.

“Blood tests revealed Gus was still producing red cells but losing them at a steady rate while x-rays and an ultrasound scan confirmed his spleen was enlarged and that there was a small volume of fluid in his abdomen.

“A sample of that fluid contained red blood cells and a type of white blood cell, called neutrophils, suggesting inflammation but there was not enough fluid present to suggest this was the cause of his dramatic anaemia.

“This was becoming a race against time, as Gus’s red blood cell count was continuing to decrease rapidly and his body was clearly struggling to cope.

“He was extremely sluggish and both his breathing and heart rates increased worryingly.

“He was so poorly we needed to give him a blood transfusion and, at first, he responded well but by the next morning his red blood cell levels had begun to drop again.

“His spleen had also become palpably larger, so Dr Jones performed a second ultrasound and this time the spleen appeared darker in appearance and was in an unusual position.

“He then examined the blood flow through the splenic vessels and identified an obstruction which was preventing blood flowing out of the spleen, meaning the spleen needed to be removed.”

LVS head of surgery, Dr Janet McClaran, a European and American specialist in soft tissue surgery, then took charge of the case, with the subsequent operation finally uncovering the reason Gus had become so unwell.

Dr McClaran revealed: “An exploratory laparotomy on Gus found his spleen had become partially twisted around its own blood vessels, strangling the blood flow.

“I removed the spleen to prevent any more of Gus’s blood becoming trapped and the surgery was very successful.

“Gus recovered well. His red blood cell levels were monitored closely after surgery and did not drop and he was soon back to his happy sociable self.”

Dr McClaran admitted it was an extremely uncommon problem to discover in a smaller dog like a French bulldog.

She said: "Gus’s case was very unusual. Splenic torsions can occur spontaneously in large, deep-chested dogs such as German Shepherds and Great Danes but have only rarely been reported in smaller breed dogs.

“It’s a good example of the complex cases we often see at LVS, where our expert team and excellent facilities mean we are able to identify and treat rare and challenging conditions like this, especially ones that do not present with typical symptoms.”

For more information about London Vet Specialists, and the services it offers, visit https://londonvetspecialists.vet/.