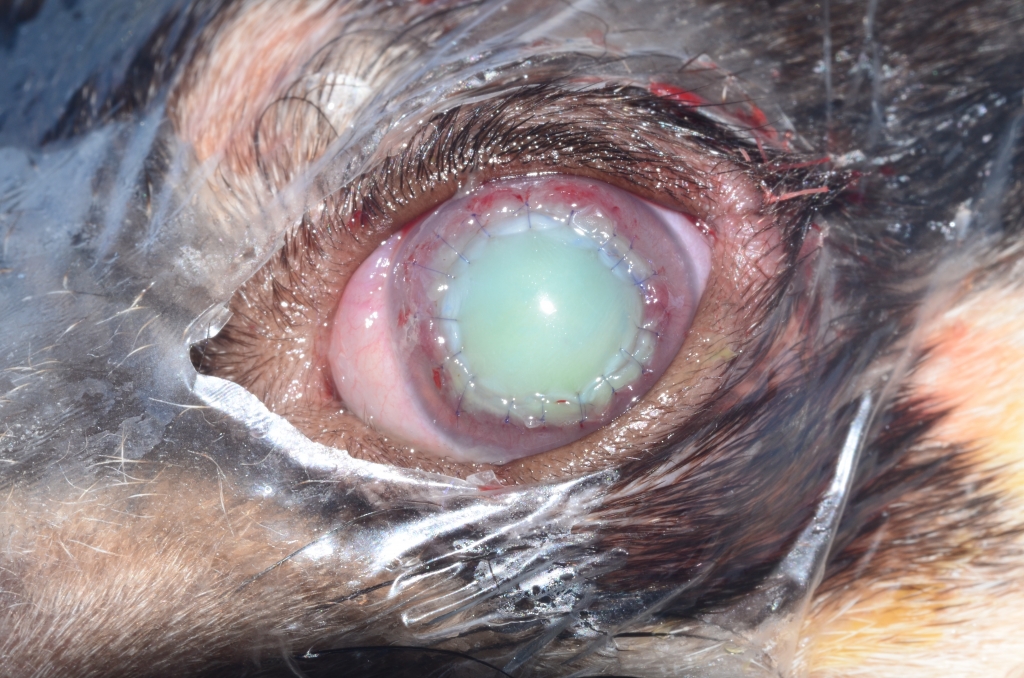 A newly developed type of graft has restored vision in a Chihuahua’s extensively damaged cornea.

Pepe was initially diagnosed with a shallow corneal ulcer, but within four days the eye had deteriorated significantly and he was referred as an emergency to the ophthalmology department at Davies Veterinary Specialists (Davies).

“Despite the short period of time between the initial complaint and referral to us Pepe had developed a deep ‘melting’ corneal ulcer in his left eye,” said Davies ophthalmology team members David Gould and Ioannis Tzouganakis, who carried out Pepe’s surgery. “He needed immediate treatment in order to try and save his eye and vision.”

A melting corneal ulcer occurs when a certain type of bacteria (typically Pseudomonas aeroguinosa or ß-haemolytic streptococcus) infects an existing corneal ulcer and causes progressive malacia and destruction of the corneal stroma. This can progress to rupture of the eye if left untreated.

Pepe’s ulcer was affecting the majority of the corneal surface and was extending close to its deepest layer, Descemet’s membrane, so the eye was in imminent risk of rupture. Initially he received intensive medical management from the nursing team at Davies and, once the infection was under control, he was anaesthetised for a novel surgical procedure to try to save his vision.

“Extensive damage to the cornea meant that conventional grafting procedures would leave Pepe’s eye, at best, severely scarred in the long term,” explains Ioannis. “This would comprise the clarity of his vision for the rest of his life but thankfully we had another option.”

A newly developed corneal xenograft (ie a graft from a different species, in this case derived from pig cornea) was used to repair Pepe’s damaged eye. After careful preparation and removal of infected areas of cornea from the surgical bed, the graft was secured to the adjacent cornea, with the aid of an operating microscope and microsurgical equipment.

Pepe made a full recovery over the coming weeks and at 4 months post-operatively his eye is fully functional, visual and minimally scarred.

To find out more about the ophthalmology service at Davies visit: https://vetspecialists.co.uk/services/ophthalmology/