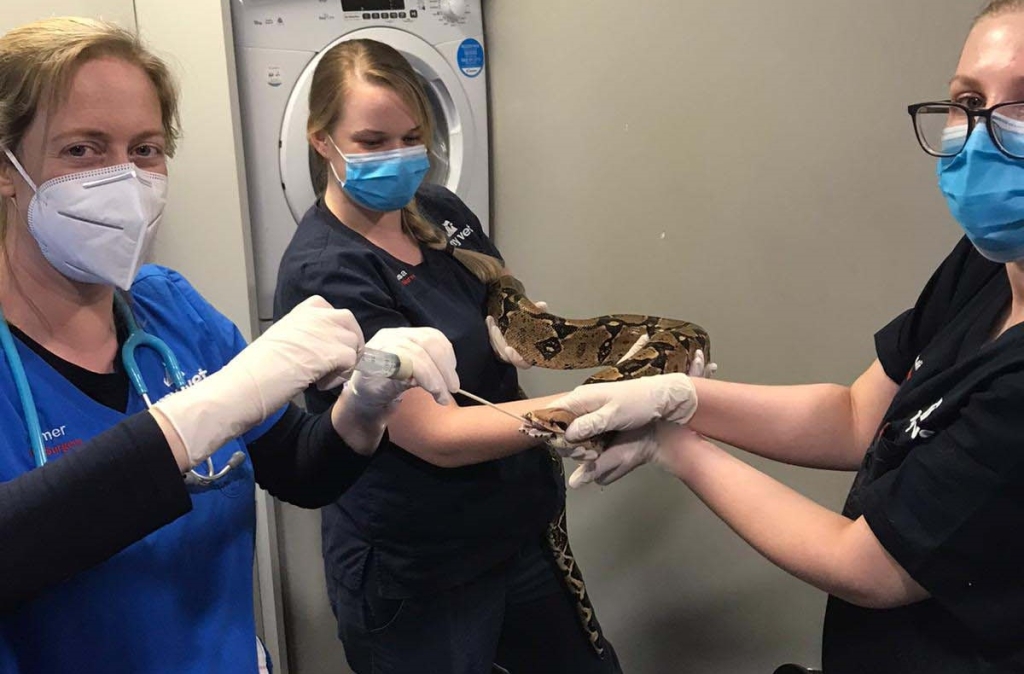 Vet Emer O’Reilly, with RVNs Lisa and Paulina, teamed up to ensure Hiss, a 15ft boa constrictor, received his food, fluids and medication.

Nothing Hiss Or Miss About 15ft Snake's MyVet Treatment


A leading Dublin vets has helped save a 15ft-long boa constrictor that was slithering into the danger zone after two months without food.

The 11-year-old snake, called Hiss, was lethargic, dehydrated and underweight after he dramatically scaled back on his eating, causing his owners to fear for his future.

His worried owners took him to the Linnaeus-owned MyVet practice in Lucan, where vet surgeon Emer O’Reilly took charge of the highly unusual case.

Emer confessed: “It was most of the team’s first time handling a snake and Hiss is a big boy! In fact, he is so big he was actually brought to the clinic in a wheelie suitcase!

“His owners told us he had not eaten for two months, when normally he would be eating every two weeks.

“We acted quickly to insert an intracoelomic stomach tube to feed him and inject fluids and antibiotics.

“We also sent him for X-rays to investigate if there was an intestinal blockage, which can sometimes happen when reptiles eat their substrate (bedding).

“The x-rays came back clear, though, so we then investigated with the owners whether there were any environmental or dietary issues at the root cause of Hiss becoming so unwell.

“A process of elimination revealed the cause to be a lower than optimal temperature and humidity in his vivarium which, over time, had reduced his appetite and led to dehydration.”

Hiss’s two-month decline took Emer and the MyVet team a month to rectify but, happily, he is now back to normal.

Emer added: “Reptiles get sick slowly and then take a long time to recover and that was the case with Hiss.

“It was a real team effort to help him recover with our internal medicine and imaging team leading the diagnosis and treatment, and our nurses and animal care assistants instrumental in getting Hiss to take his treatments as he is so large!

“His owners were really dedicated too, bringing him in twice a week for his treatments to give him the best chance to recover.

“After a month of treatments, Hiss finally started eating on his own, passed faeces and he hasn’t looked back since.

“He’s now gone home where his owners have provided a long-term solution to his issues by upgrading his vivarium with new thermometers, a new hygrometer (measures humidity) and new bulbs for heat and UVB light.

“They’re now monitoring his environmental temperatures and humidity very closely to ensure he stays warm and comfortable and keeps eating and remains hydrated.”

For more information on MyVet, which is owned by Linnaeus and has three clinics across the Dublin and Kildare area, visit: https://www.myvet.ie/.