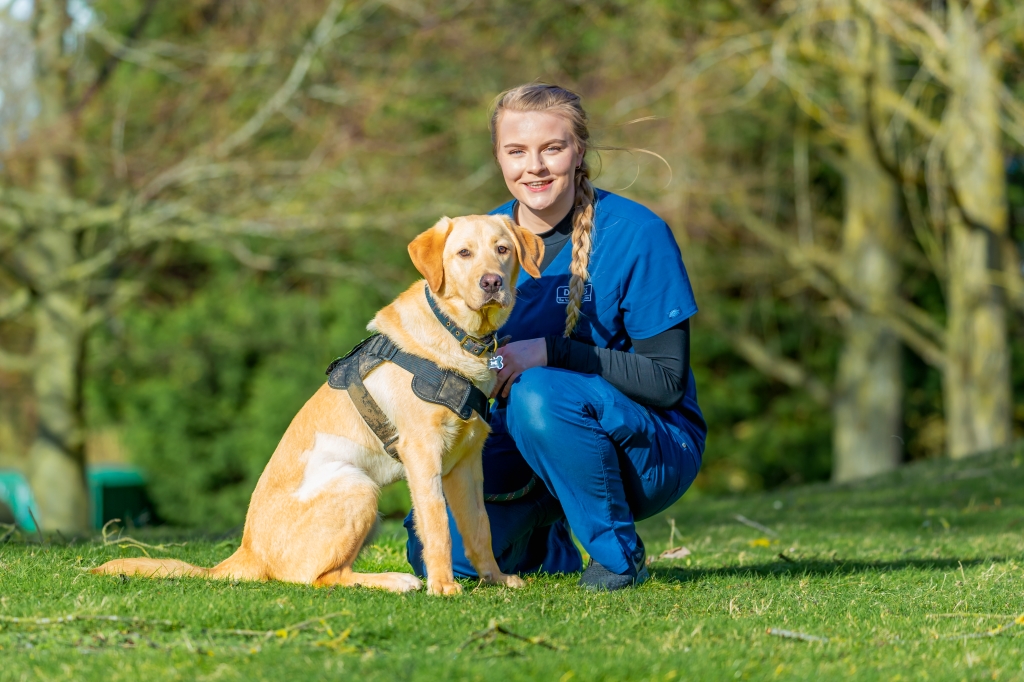 A patient care assistant at Davies Veterinary Specialists (Davies) has adopted charity dog Parker, who was admitted to the Hertfordshire based referral practice with leptospirosis.

Poppy Watkin immediately fell head over heels for the poorly eight-month-old yellow Labrador Parker when he was admitted by a local animal charity to the internal medicine team at Davies Veterinary Specialists. He had acute kidney injury and progressive jaundice.

“On presentation Parker was severely azotaemic and oliguric; his oliguria was starting to cause peripheral oedema,” said Katherine Clarke who is a clinician in small animal medicine at Davies. “Following comprehensive investigations, he was diagnosed with Leptospirosis.”

A urinary catheter was placed to monitor Parker’s urine output. He was started on intravenous amoxicillin clavulanate and was given a single dose of furosemide. He consequently developed severe polyuria, producing 20-25ml/kg/hour of urine. His intravenous fluid therapy rate was adjusted to match his urine output; he was also weighed regularly throughout the day. His hydration status and electrolytes were closely monitored.

“Parker’s fluid balance was challenging to manage and adjustments to his intravenous fluid therapy rate were required regularly to prevent dehydration or fluid overload,” said Katherine. “He was initially completely anorexic and for over 24 hours his azotaemia did not improve. However, he then started to show some signs of recovery with an improvement in his azotaemia and some return of appetite.”

Parker was in hospital for two weeks; during this time his azotaemia completely resolved, his polyuria also significantly improved (although did not resolve, likely due to medullary washout) and his appetite returned to normal Labrador levels! His jaundice persisted but improved.

At the point at which Parker was ready to go home, patient care assistant Poppy realised the dog didn’t have a real home to go to other than back to the rescue charity.

“I couldn’t bear the thought of being parted from Parker, so my only option was to formally adopt him,” said Poppy. “He’s been living with me for just over a month now. He has settled in very well and has made a full and complete recovery from his Leptospirosis infection. I am so lucky to have him, and I think he feels the same way about me!”

Parker had been vaccinated against Leptospirosis, but only a few days prior to becoming unwell, thus it is likely that he had subclinical infection at the time of vaccination. Parker is the third Leptospirosis case seen at Davies in the last few months and highlights the importance of considering this disease for cases presenting with an acute kidney injury.