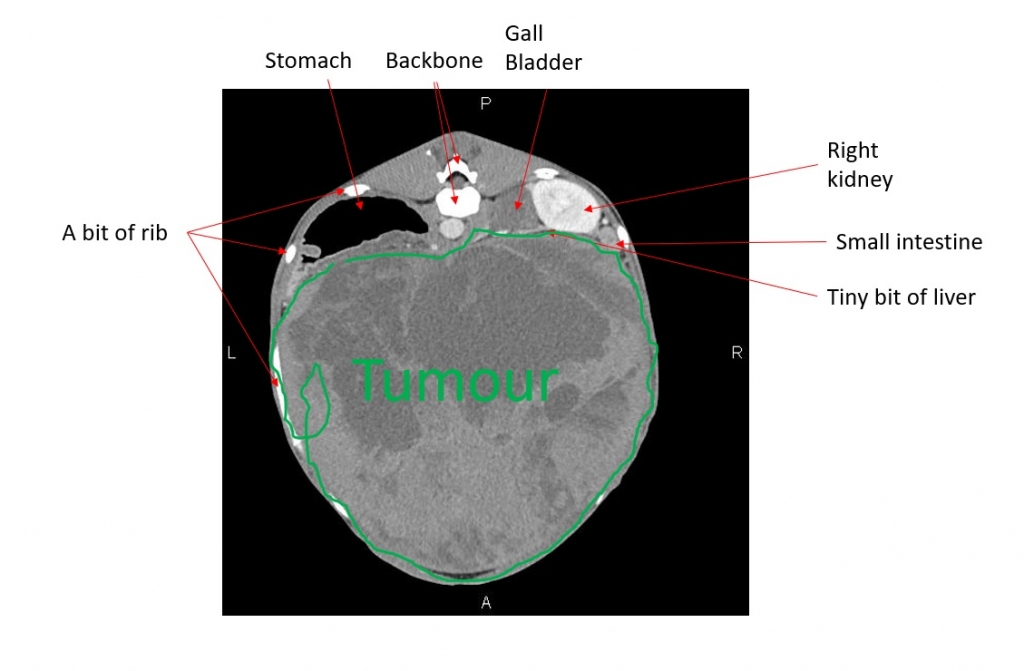 A top cancer specialist at a leading animal hospital has admitted that even he was “astonished” after
removing a giant 7kg tumour during an emergency operation on a 10-year-old dog.

Remarkably, the lurcher came through the intricate operation unscathed with her delighted owner
declaring afterwards: “Sky has never been brighter.”

Gerry, who is an RCVS and European specialist in veterinary oncology, has now given a dramatic description of how a lethargic, pot-bellied dog with a poor appetite turned into such an astounding, life-threatening case.

He said: “Sky was referred to NDSR after her owner had become concerned about her weight loss, low
energy levels and what appeared to be a pot belly.

“When we examined her, she was desperately lean and weighed just 24kg. The pot belly was revealed to be caused by an extremely large tumour which had developed internally.

“We carried out a CT scan which confirmed the presence of a huge mass – so big it actually distorted the layout of everything else in her abdomen, making it impossible to be sure about whether it grew from her liver or her spleen.

“The sheer size of the tumour presented enormous problems in planning the operation, with a real risk that Sky may not survive the ordeal.

“In addition to the significant risk of severe bleeding, we also knew we would have to move quickly because the weight of the mass would compress vital blood vessels, limiting the return of blood to Sky’s heart.

“The decision was taken to perform surgery, despite these risks, as Sky’s quality of life was only getting worse without it.”

Renowned specialist Gerry, who has led the industry-leading oncology service at NDSR for 12 years,
revealed the real drama started when the painstaking surgery began.

He explained: “When the abdomen was opened, it was still not clear where or what the tumour grew from. It was continuous with both the spleen and one of the lobes of the liver.

“We elevated the mass to ensure the blood return to the heart was maintained and then it was
delicately cut away.

“Every one of us was astonished when the tumour was finally removed and it could be seen in its entirety.

“It weighed in at a huge 7kg, which represented 29 per cent of Sky’s pre-surgical body weight. That is the equivalent of a large terrier or three chihuahuas! No wonder she had a poor appetite!

“The operation was a great success, though, and Sky has made a fabulous recovery. Ten weeks after her operation, she had regained 4kg and her owner told me that: ‘Sky has never been brighter’.”

For more information on NDSR, which is part of Linnaeus, and the specialist services it offers, visit www.ndsr.co.uk or search for North Downs Specialist Referrals on social media.