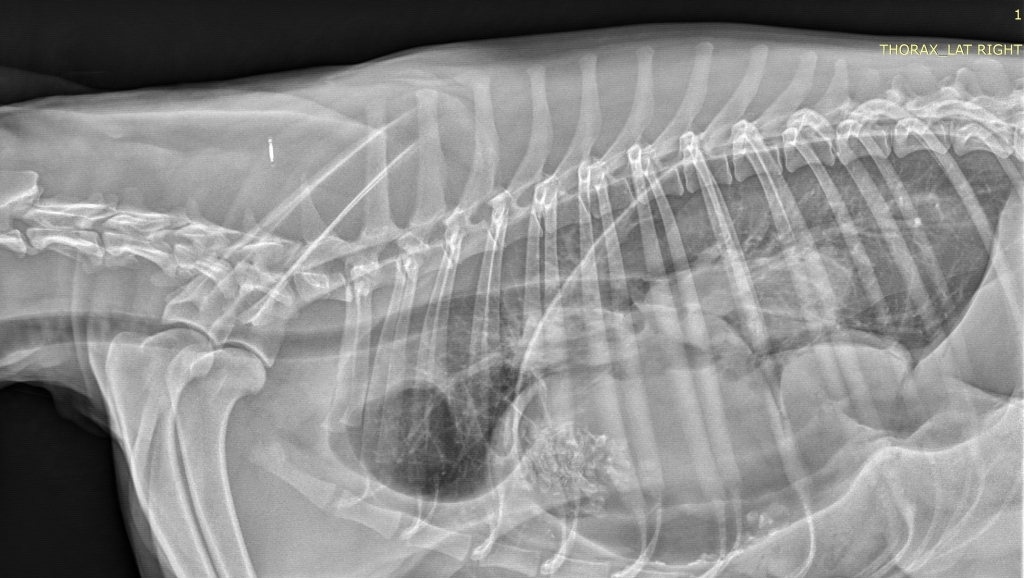 Leading Essex vets have saved the life of a young rescue dog who had been so badly injured her internal organs were in completely the wrong place – likely as the result of a road accident some months earlier.

Two-year-old Romanian rescue dog Florence had collapsed in shock and was left fighting for breath when she arrived at renowned Linnaeus-owned referral vet centre Southfields Veterinary Specialists, in Laindon, Essex.

Dr Henry L’Eplattenier, clinical director at Southfields, arranged for radiographs of Florence’s chest to be taken and soon discovered why the pup was in such a poorly condition – her stomach and part of her liver were actually sitting in her chest cavity and compressing her lungs. He then had to carry out an emergency operation to save her life.

The RCVS and European specialist in small animal surgery said: “Florence must have had some sort of accident in the past involving a big blow to her abdomen, possibly a road traffic accident.

“Radiographs showed she had a very dilated stomach which was compressing the lungs and preventing proper ventilation of the lungs.

“I explored the abdomen and confirmed a small rupture through which the stomach had migrated into the chest.

“However, the stomach was so dilated that I had to increase the opening in the diaphragm in order to pull the stomach back into the abdomen, where it belongs.

“Once the stomach was back in place, we then realised that part of the liver was in the chest, too.

“There were some adhesions between the liver and the chest, indicating the rupture was not recent, but that the dog had been living like this for a while – probably several months.

“Finally, once the stomach and liver were back in their normal positions, chest tubes were placed so that we could evacuate the air from the chest and I could stitch up the diaphragm.

“Florence was a little weak initially after surgery but then recovered very well with the chest tubes removed three days after the operation and she was allowed home.”

Dr L’Eplattenier said the drama came as a huge shock to Florence’s new owners who had no idea the beloved pet they had rescued had previously suffered so much internal damage.

He added: “Florence had only been with them for three months after she’d been rescued from Romania.

“She had been found heavily pregnant and had a litter of puppies before being adopted by her current owners.

“They had noticed some regurgitation and retching in their puppy but did not worry too much about it, as Florence was otherwise very active and did not look ill.

“So, they were naturally very alarmed when she suddenly started struggling to breathe and collapsed.

“I suspect the regurgitation and retching were caused by the rupture in the diaphragm and the abnormal position of the stomach. This should be resolved now the stomach is back in its normal position.”

For more information about Southfields, which is part of Linnaeus, visit www.southfields.co.uk or search for Southfields Veterinary Specialists on social media.