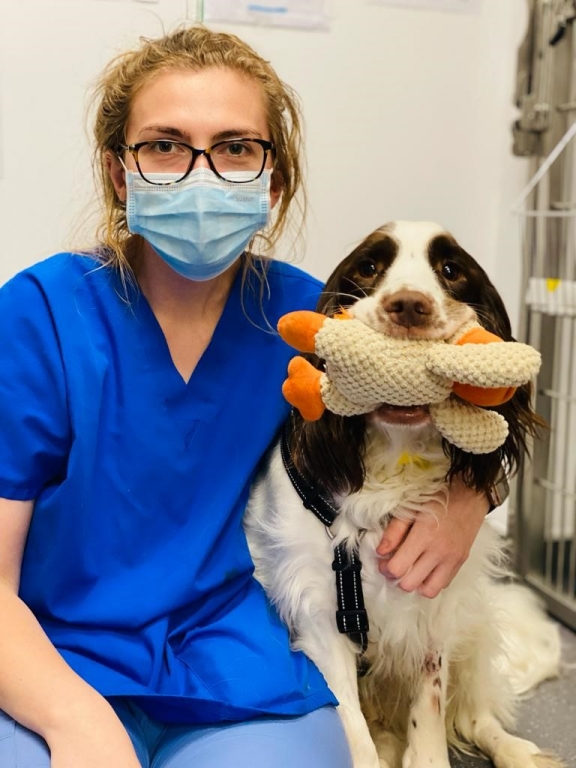 A three-year-old springer spaniel called Bandit has had a last-minute reprieve thanks to vets at one of the UK’s leading referral vet centres.

Bandit was diagnosed with a tumour at the base of his brain which was also attached to his spinal cord, meaning he was slowly being paralysed.

However, experts at Linnaeus-owned Southfields Veterinary Specialists, in Essex, were able to carry out an intricate operation to remove much of the tumour, before the practice supported Bandit with a four-week course of radiotherapy via its hi-tech linear accelerator.

Head of Neurology at Southfields and RCVS and European specialist in neurology Ane Uriate carried out the operation with colleague Guillaume Albertini a first-year resident of the European College of Veterinary Neurology.

Ane explained: “Bandit’s MRI scan had revealed a well-defined, left lateralised, intradural / extramedullary space-occupying lesion affecting the medullar oblongata at the level of the atlas, located in the left dorsoventral aspect of the vertebral canal.

“Bandit returned a few days later for surgery which was quite challenging as the tumour was attached to the spinal cord.

“In an intricate, three-hour operation we removed the vast majority of the lesion, with tests later confirming that, happily, it was a benign meningioma.”

Bandit then underwent an intensive course of radiotherapy to shrink the remaining part of the tumour which was too close to the spinal cord to safely remove.

His course of treatment was led by the highly-qualified and vastly experienced oncology specialist James Elliott, head of the radiation therapy service, whose expertise has been recognised by the veterinary authorities in the UK, USA and Europe.

Relieved owner Katrina Osmotherly, from Laindon, in Essex, praised the treatment her pet received at Southfields, having initially feared about his quality of life before being seen at the Linnaeus practice.

Katrina said: “Bandit came home for a few weeks after he had recovered from his surgery and then had to return to start his course of 20 radiotherapy fractions.

“First, he had a CT scan to accurately map out the area that needed to be targeted and then he began having his radiotherapy, which was five days a week for four weeks.

“I would drop him off on a Sunday night and bring him home for the weekend the following Friday and he came through it all really well.

“He is an absolute miracle, a real superstar and is so much happier and healthier. He’s just enjoyed his first day out after all he’s been through, the operation, being in intensive care and then the radiotherapy, and we went a walk to Southfields to see everyone there.

“The specialists, vets and all the nurses were fantastic and went above and beyond in looking after him and they were so pleased to see him again looking so well.

“I realise now he must have been feeling so unwell for so long but now he’s almost back to normal.”