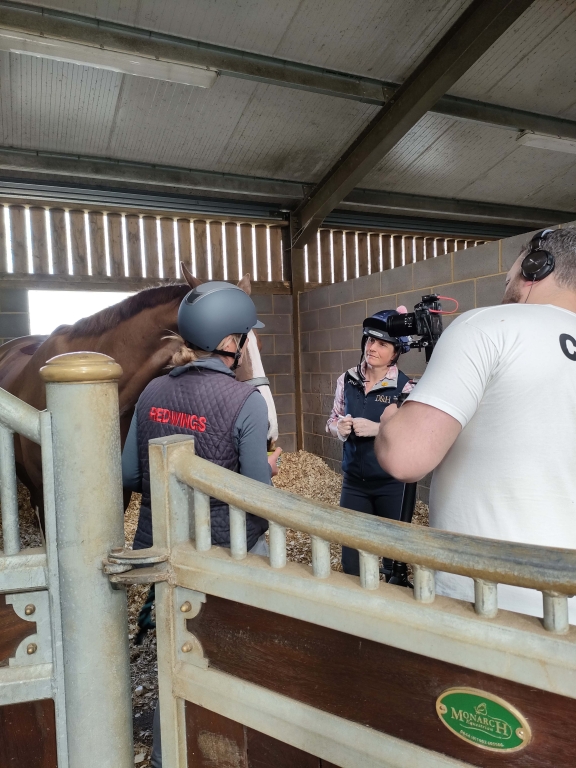 
The collaboration* behind Strangles Awareness Week (SAW) which began yesterday (2nd – 8th May) is at Badminton this week – the biggest five-star eventing competition in the world.

Current champion Piggy March – who is supporting the campaign to raise awareness of strangles and help prevent an outbreak – is coming back to defend her title with bay mare Vanir Kamira.

The event - which starts tomorrow and goes on until Sunday (4th – 8th May) - is one of only six five-star eventing competitions in the world. It’s headed by Great Britain’s reigning Olympic, World and European champions and includes 14 of the top 20 riders in the FEI Eventing World Athlete Rankings, with £100,000 prize to the winner.

SAW – now in it’s third year and organised by leading equine welfare charities, vets, researchers and higher education institutions from around the world - will be on the British Horse Society (BHS) stand at 101 Somerset Way. There will also be the chance to pick up a free SAW thermometer so you can take part in the ‘Temperature Check Challenge’ both on the stand and in goody bags being distributed by Your Horse & Country Magazine.

This year, owners are being invited to create a seven-day record of their horse’s resting temperature using a free online checker which will calculate an average and help them know their horse’s normal range, something that fluctuates by a fraction of a degree through the day according to a number of factors. A high temperature is an early warning sign that your horse may have been infected with strangles – and will become infectious to other horses - so getting to know your horse’s ‘normal’** temperature, and variation, could help spot strangles before it has chance to spread to other horses.

It’s the first time the campaign has attended Badminton.

Andie McPherson, Coordinator of SAW and Campaigns Manager at Redwings Horse Sanctuary, said: “We really want people to come to the BHS stand to talk to us about strangles and get their hands on a free thermometer to use when they get home to their horse.

“It’s particularly relevant for this year’s Badminton considering the change in FEI bylaws around biosecurity protocols for this level of competitor which includes regular temperature checking before and during the event, introduced in response to the EHB-1 outbreak in Valencia last year which led to the death of 18 horses.

“Temperature checking is just as relevant for the prevention of strangles which is the most diagnosed infectious disease in horses.

“Evidence shows that spotting fever early can allow measures to be taken to prevent spread and costs associated with the disease.”

“The whole collaboration is fully behind Piggy in her defence of her title and we encourage owners to watch her video where she gives her tips on how to take temperature for the first time, a position we know lots of horse owners will be in when they take the temp check challenge this week.”

Nic De Brauwere, Head of Welfare and Behaviour at Redwings, is also doing a talk on the Badminton Live Chat Zone on Saturday (7th) with Gabby Madders, Welfare Campaigns Officer, from BHS. For more information on how you can tune in if you aren’t attending the event, follow the SAW social media channels.

To find out more about Strangles Awareness Week, the Temperature Check Challenge and other ways to get involved, please follow the SAW Facebook page or go to www.redwings.org.uk/strangles/strangles-awareness-week

If you’re a horse owner, yard manager, vet or equine professional and would like to join a list of ambassadors to help promote the SAW through social media, please sign up here or email [email protected]

North West. United Kingdom
This 100% equine practice in the North West seeks a Vet to join their team.The practice has friendly staff, clients and team of Vets.It is a...

South Wales. United Kingdom
A fantastic opportunity has arisen for an Equine Veterinary Surgeon at a well-established independent practice in Carmarthenshire, Wales. Th...