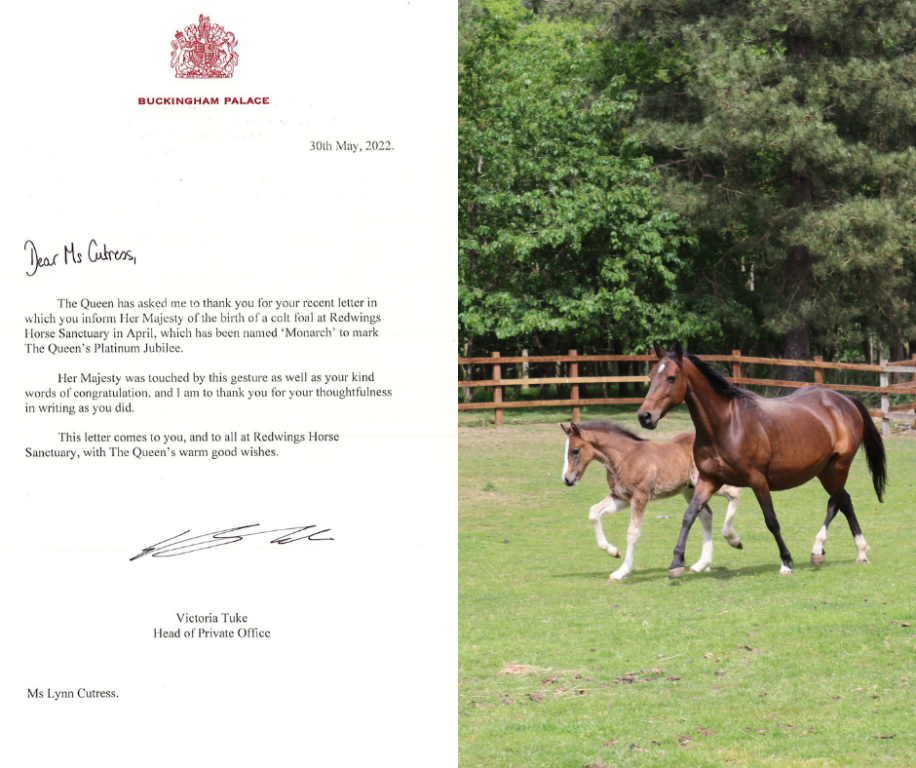 HM The Queen ‘Touched’ By Miracle Foal Named In Her Honour


HM The Queen was ‘touched’ by Redwings’ naming of miracle foal ‘Monarch’, in honour of her Platinum Jubilee.

The charity wrote to Her Majesty to inform her of the arrival of the colt in April, born safe and healthy to his mother ‘Majesty’ who had been involved in a road accident whilst pregnant. A letter from Buckingham Palace reads:

“The Queen has asked me to thank you for your recent letter in which you informer Her Majesty of the birth of a colt foal at Redwings Horse Sanctuary in April, which has been named ‘Monarch’ to mark the Queen’s Platinum Jubilee.

“Her Majesty is touched by this gesture as well as your kind words of congratulations, and I am to thank you for your thoughtfulness in writing to her as you did.

“This letter comes to you, and to all at Redwings Horse Sanctuary, with The Queen’s warm good wishes.”

“It’s wonderful to have received Her Majesty’s good wishes.

“We very much hope she has enjoyed her special weekend.”

Monarch was turned out on grass for the first time with his mum last week, just in time to celebrate the Queen’s Jubilee, and video* of the pair shows them frolicking and galloping in their new field at one of Redwings’ Norfolk sites.

11-year-old Hackney-type Majesty, who is 14.1hh, was found stuck in some railings on the central reservation at Tilbury Docks, Essex after an accident in November. She was taken to a private boarding establishment and treated for a broken nose and chest injuries. On realising that she was also in foal, Redwings was asked to take her, and offered her a forever home in February.

Nicola Berryman, Redwings Welfare Veterinary Surgeon, who is overseeing the welfare of the pair said:

“It’s wonderful to see them both doing so well.

“Monarch is a strapping boy, who’s growing quickly and will soon tower over his mum!

“We were all overjoyed when Monarch was born, and we know those who have followed their story so far will love to see them galloping together and frolicking in their new field.”

Monarch was born in the early hours of Thursday 7th April, making him almost two months old now, and he and his mum, and two other mares who came into Redwings’ care whilst in foal and went on to have beautiful babies, are the faces of Redwings’ summer fundraising appeal.

As a charity 100% funded by donations, it is thanks to the generosity of its supporters that Redwings is able to take in and care for horses like Majesty and Monarch.