The ABCD and Merial Young Scientist Award 2009 was presented to Jonas Wensman, from the Swedish University of Agricultural Sciences (SLU, Uppsala), on 20 June in Dubrovnik, on the occasion of the congress of the European Society of Feline Medicine. 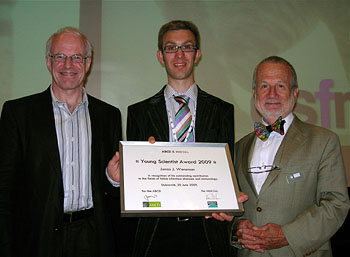 Jonas Wensman, laureate of the 2009 ABCD & Merial Young Scientist Award, flanked by Jean-Christophe Thibault from Merial (left) and Marian Horzinek from the ABCD (right). Jonas Wensman (33) received the award for his work on Borna virus infection in cats and in particular the development of a real-time RT-PCR diagnostic assay. “Borna virus infection or staggering disease is a fatal, progressive, neurological disorder which also affects cats. At present, the tentative diagnosis is made clinically by excluding other causative agents and on the basis of history and epidemiology, he recalled. The need for sensitive and specific diagnostics has led to he development of a real-time RT-PCR assay, which is currently under evaluation. The award was presented by Professor Marian C. Horzinek, Chair of the Advisory Board on Cat Diseases (ABCD) and of the award jury, who congratulated the laureate. “The standard of the applications we received was very high, but the entire jury agreed on the quality of the work of Dr Wensman. This may well be the first of a number of awards he will collect in his career!” Dr Jean-Christophe Thibault, Merial’s Technical director for biologicals (Europe, Middle East and Africa), added, “True to Merial’s mission statement of being an innovation-driven leader in animal health, we are very proud to have made this European award possible. Initiatives such as these, in association with renowned scientific bodies like the ABCD, highlight promising young researchers and the teams to which they belong.” Both Professor Horzinek and Dr Thibault agreed that Jonas Wensman, under the tutorship of Professors Mikael Berg and Sándor Belák (SLU, Uppsala), has contributed lasting insights into an enigmatic feline infectious disease. The ABCD and Merial Young Scientist Award, created in 2008 and worth 1000 €, is funded by Merial and is presented to a young scientist in veterinary or biomedical science, who has made an original contribution in the field of feline infectious diseases and/or immunology. Applicants should have published their findings in a journal listed in PubMed or Web of Science or have had them accepted by another recognised assessing body. Candidates should be based in Europe, have completed a veterinary or biomedical curriculum, and be under 35 years of age at the time of application. Applications for the 2010 award are now being invited (deadline 1 December 2009). Application forms and detailed rules can be downloaded from the ABCD web site (www.abcd-vets.org) For further information, please contact Karin de Lange, ABCD secretary, karin.delange@abcd-vets.org The European Advisory Board on Cat Diseases (ABCD) is an independent panel of 17 leading veterinarians from ten European countries, with an expertise in immunology, vaccinology and/or feline medicine. The ABCD was set up to compile guidelines for the prevention and management of major feline infectious diseases in Europe, based on current scientific knowledge. For more information, please visit www.abcd-vets.org.