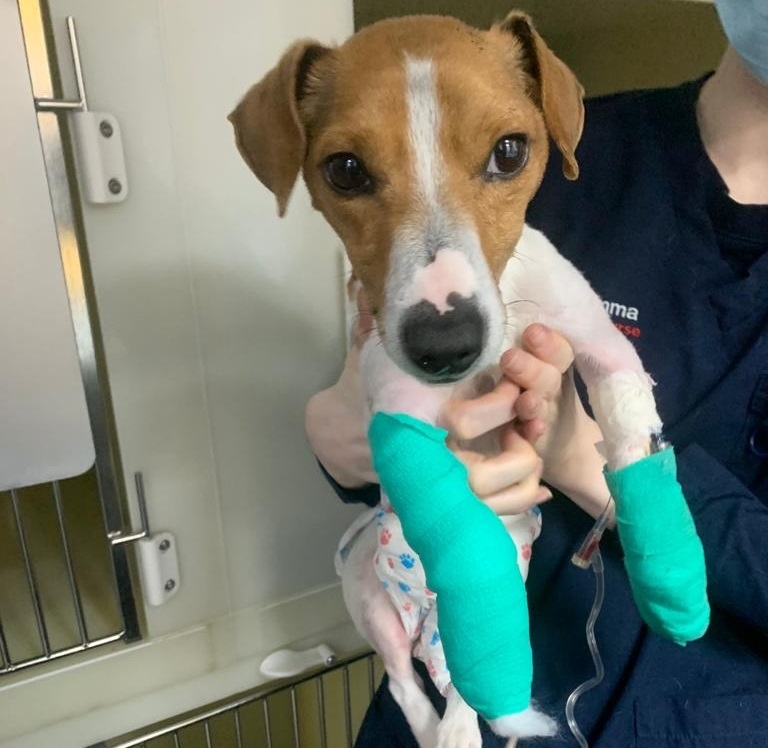 A Dublin vet has described a dog’s dramatic recovery after an epic three-day fight for life as the “most miraculous” in her career.

Emma Birch, from the Linnaeus-owned My Vet practice at Firhouse shopping centre in Dublin 24, says she was left amazed by Ted the Terrier’s survival.

She even admitted the four-year-old Jack Russell was so close to death they considered the possibility of putting him to sleep – only for Ted to astound them with his will to survive.

Emma explained: “He was dangerously ill after eating a large quantity of slug pellets, with his shocked owner having found him having seizures beside an open box of the slug bait.

“Ted was very unresponsive when he arrived at the practice. He was having seizures, was extremely hypothermic and with white mucous membranes which are a sign of shock or low red blood cells.

“Initially, we needed to stabilise him including a propofol infusion and intensive supportive treatment until his seizuring stopped.

“We also carried out a gastric lavage to remove as much slug bait as possible, then started enemas every four hours. By day three, we were still removing slug pellet residue by enema!

“He remained minimally responsive despite the intensive care and constant nursing, and on several occasions throughout treatment his case seemed so hopeless.

“Then on day three he began to turn a corner. Suddenly, he was slightly more responsive and managed to lick some food from our fingers and from there he went from strength to strength!

“Incredibly, he’s now doing great and, without a doubt, Ted is the most miraculous recovery I've ever seen.”

Relieved owner Rachel McGrath, from Kiltipper in Tallaght, Dublin 24, said: “Our Ted certainly gave us all an awful fright after he had got into a bottle of slug pellets which left him fighting for his life.

“He was so sick, almost to the point where we didn't know if he would make it or not, but My Vet took really great care of him.

“We are truly grateful to everyone in My Vet for everything they did. Ted is doing amazing now, like nothing ever happened. He is well back to being his mischievous self!”

Founded in 2005, My Vet is a family practice employing more than 50 staff across its three sites and partnered with Linnaeus earlier this year.