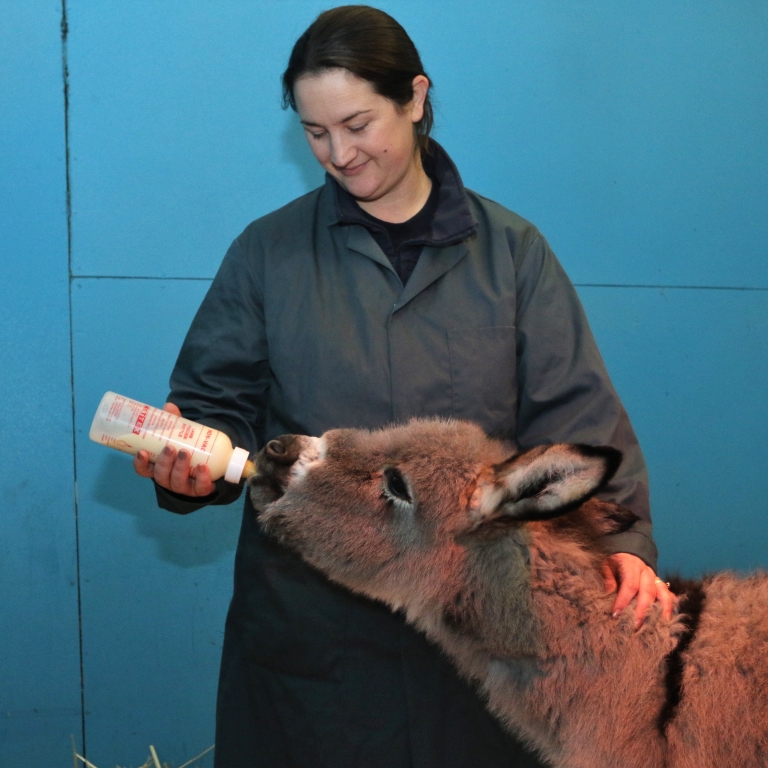 International animal welfare charity, The Donkey Sanctuary, has developed a pioneering suckling system to help the natural development of orphaned foals in its care. The idea came from one of the charity’s grooms who had experience in the agriculture sector and had seen an artificial suckling system used to rear new-born lambs.

Sam, an orphaned donkey foal relinquished into The Donkey Sanctuary’s care at just one week old, was initially hand reared with bottle feeds every three to four hours. The team caring for Sam noticed potentially concerning behaviours developing, such as rearing up and biting in a playful manner, and the decision was taken to adapt the artificial suckling system to replace hand rearing.

On the artificial system, Sam’s milk formula was accessible 24 hours a day. Detailed monitoring revealed that he suckled at a very variable rate throughout a 24-hour period, replicating natural rearing behaviour. Sam also suckled at times without taking in milk, demonstrating that suckling behaviour is a key part of maternal nurturing.

Foals are dependent on a milk-based diet for at least three to four months of life, which has significant cost and resource implications for equine sanctuaries.

Ben Hart, The Donkey Sanctuary’s Senior Lead Behaviour and Human Behaviour Change, said: “Although rare, orphaned foals are one of the greatest challenges to equid care and welfare. Hand rearing is often the only option for equine sanctuaries when an orphan arrives. However, too much inappropriate handling from humans can result in behavioural issues as the foal grows.”

Male donkeys can be extremely playful, often engaging in aggressive play well into adulthood. Foals learn a great deal about the world by biting things and interacting with them in this way. Bottle-reared foals may exhibit more of this behaviour because of incorrect handling, such as being pushed away, which the foal interprets as positive, playful attention.

The artificial feeding system is simple, consisting of a plastic tube leading from an enclosed milk bucket to a lamb bottle teat attached to a stable door at an appropriate height. The Heatwave Milk Warmer heats the formula in the plastic tube as it passes through the machine. [See photo 3 in link below]

The automatic feeding system not only allows the foal to self-administer and potentially feed more naturally, but research[1] also shows ad lib feeding may also promote healthier growth and development.

The system also allowed for 24-hour camera monitoring and the team caring for Sam observed other activities replicating the natural behaviour of foals. These included head butting the teat, chewing or rubbing the teat and staying close by even when not feeding – all behaviours considered to be non-nutritive suckling and similar to when foals stay close to their mothers in the first five months of life.

Sam flourished in the overall care of The Donkey Sanctuary and recently reached the age where the team could consider him for rehoming. As a quirk of fate, the charity matched him to one of its ‘quality time volunteers’, who helped look after him at the charity’s Paccombe Farm, where he lived.

The artificial feeding system was adapted so successfully for Sam that The Donkey Sanctuary Ireland used it again to help rear a rejected foal called Bugsy, when it came into their care.

The Irish team further adapted the system, building a structure to house the suckling equipment with space for the foal to enter and reach the teat.

This was an improvement on the original system, as it allowed Bugsy to live with similarly aged companions without disrupting the feeding system. This in turn minimised social isolation, which can compound the development of behavioural problems.

Ben Hart concludes: “Developing this artificial feeding system, which mimics the natural environment, is a great example of how team collaboration, academic excellence and lateral thinking can significantly improve not only the health, welfare and behavioural development of donkeys in our care but also equines around the world who can learn from our pioneering work.”

More from The Donkey Sanctuary