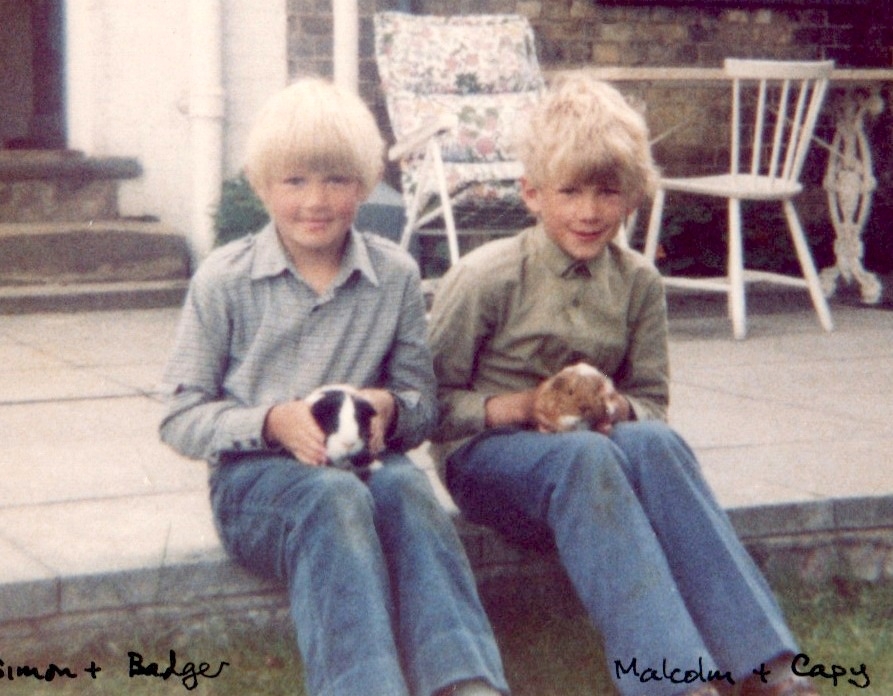 Malcolm Morley with his guinea pigs and brother

The Pets Which Mean So Much: Veterinary Professionals Share Stories Of Animals Which Have Left Pawprints On Their Heart During National Pet Month

As research shows four out of five vets (81%) have at least one pet in their household, and to kick off National Pet Month, the British Veterinary Association (BVA) is encouraging veterinary professionals to share photos and stories of the pets who inspired them to become vets, who made their childhoods special or helped to make them a better vet.

It’s common knowledge that vets love animals, so it’s perhaps not a surprise that a BVA survey has revealed that not only do the majority of vets (81%) have at least one pet in their household, but more than half (56%) actually own more than one pet. Vets in clinical practice are more likely than average to own a pet, with 86% owning animals compared to 68% of those not in clinical practice. It is also heartwarming to note that more than two-thirds of vets (68%) also said all or some of their pets came from rehoming abandoned or stray animals.

Dogs top the list of most popular pets for vets, with 55% of vets having canine pals and almost a quarter (24%) owning more than one dog. The stats also showed that vets in equine practice (73%), commerce and industry (70%) and mixed practice (69%) were more likely than average to own a dog.

Throughout National Pet Month, which launches on 1 April, BVA is encouraging veterinary professionals to join the conversation on social media and share photos and stories about the special animals in their lives.

BVA President Justine Shotton has always been a dog lover; as a child she would stop people on the street to ask to stroke their dogs and her love of cuddly canines grew only stronger when her parents welcomed two dogs, both Japanese Spitz, called Tora and Hana into their family.

Justine said: “I had a very strong bond with my childhood dogs, especially with Tora. We would take them to dog shows for fun and Tora even made it to Crufts! I would build agility courses for the garden out of garden furniture and we would race from the end of the garden to the house – Tora would always win!

“They lived long, happy lives – Hana reaching 14 and Tora the grand age of 15 – and were the dogs who completed our family, who helped me decide to be a vet and, in that respect, were the dogs who changed my life. They got me through school, through vet school and all the challenges and ups and downs of that period of my life and they will always occupy a special place in my heart.”

But of course, dogs are not the only pets beloved by vets. Almost half of vets (48%) own a cat while one in eight owns a horse (13%). Around one in ten vets own fish or birds, seven per cent own small furries such as guinea pigs and hamsters, three per cent have rabbits and one in twenty (5%) have reptiles or invertebrates.  A small number of respondents said they owned cows, sheep, chickens, goats, pigs, bees, alpacas and ferrets.

When BVA Junior Vice President Malcolm Morley and his brother Simon were allowed to have guinea pigs as a child, it was the start of a life-long love for the little herbivores and one of the reasons he was inspired to become a vet.

He said: “Having the guinea pigs growing up certainly triggered my interest in being a vet. We had to learn to care for them, find out about their food and welfare needs and also how to look after their babies when they came along. I loved having them so much that when my own children said they would like pets, it was an easy decision to welcome more guinea pigs into our family.

“As I’m an equine vet, my veterinary knowledge about guinea pigs is low, so I have always been grateful to my small animal colleagues for caring for our furry friends when they became unwell. There is something about being on the other side of the consultation table that really makes you appreciate the enormity and importance of what our profession does for both animals and their loving owners.”

Justine still has a special bond with a dog, her parents eight-year-old Japanese Spitz Miko, the great-grandson of her childhood dogs Tora and Hana, who had one litter of six puppies. Miko, like her beloved Tora, is incredibly active and accompanied her running up the fells in the Lake District when she was marathon training and Justine is always happy to have him at her side.

Justine said: “As a vet, when you are looking after someone’s beloved pet, if you have had your own animals, it is easy to empathise with them as you have likely been the worried pet owner once or twice yourself when your own pet was poorly. Being able to be compassionate, to show that you understand the bond the owners have with their pets, can be really reassuring, and I think it does help you treat them with the best care you can – the owners, as well as their pets! Our own animals are just as special to us and they all leave pawprints on our hearts.”

To get involved with the campaign on social media, veterinary professionals can use #VetsAndTheirPets, #VNsAndTheirPets or #NationalPetMonth2022 to share their own posts and read about the pets which mean so much.