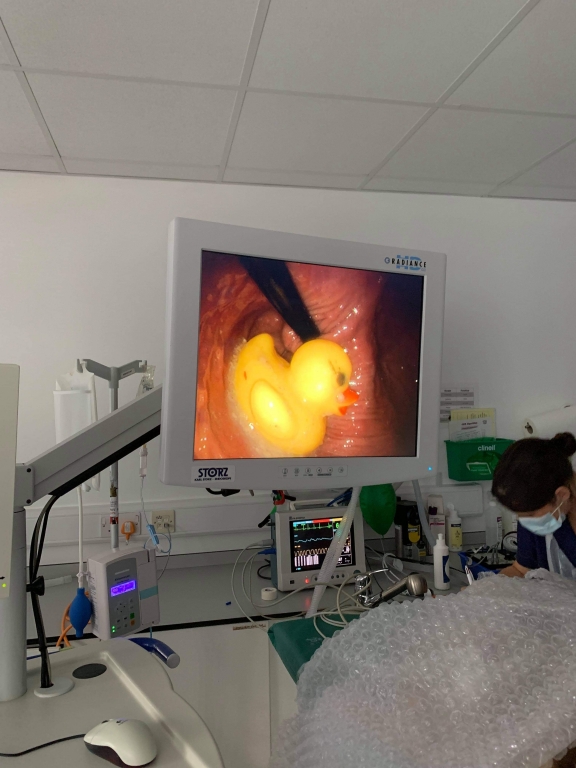 But a team from Pride Veterinary Centre in Derby saved the day for one-year-old Ronnie with a take on the old “hook a duck” fairground game.

Using video images, they were able to pull the bright yellow toy out intact after the bizarre incident at the family home in Nottingham.

Now owner Joe Fisher, 38, is framing the original X-rays and has kept the duck as a reminder of his naughty pup’s crazy early morning snack.

“I came down to get Ronnie in the morning and when I opened the stairgate, he shot past me and right up the stairs,” said dad-of-three Joe.

“He ran right into my nine-year-old daughter Edie’s room, picked up the rubber duck that was lying on the floor and ran back down with it in his mouth.

“I chased him round the house and garden for a few minutes and when I got close to him, I suddenly saw it was gone.

“I’d only been chasing him to stop him chewing it up, I never for a minute thought he’d swallow it. It was so big I couldn’t believe what he’d done.

“We were obviously really concerned that it might block his airway or something, but he didn’t appear to be bothered at all.

“He was still quite happily running about as if nothing had happened.”

“We get a lot of cases of dogs having eaten things they shouldn’t, but this was really unusual,” said Debs Smith, a senior vet at Pride Veterinary Centre. “We’ve never come across one who has swallowed a whole rubber duck.

“We sedated Ronnie so we could get an X-ray and it showed up the duck really clearly. It was still in his stomach and hadn’t passed into the intestines, but we were obviously concerned about it causing an obstruction.

“It was possible that we might have to operate but we tried an endoscopy first, passing down a camera and using it to guide us.

“It really was like playing ‘hook a duck’ and after about half an hour we got the loop around it and pulled it out.  It was a combination between the first opinion team and also our referral medicine department who carried out the successful procedure to remove the duck.”

Happily, Ronnie was soon back to his old self after the procedure and Joe was able to collect him from the surgery later that afternoon.

“It was a really worrying thing, but I felt reassured that he was in good hands,” said Joe, who runs Joe’s Juice in Nottingham.

“He was absolutely fine when I got picked up, which was great as we were heading off for a staycation break the next day.

“Pride gave us the duck back and have also been kind enough to give us the X-rays, which I’m having framed. It’s just such a crazy thing to have happened.

“Ronnie doesn’t seem to have learned his lesson and still picks up things in his mouth, but we’re trying to be extra careful to keep everything out of his reach.”