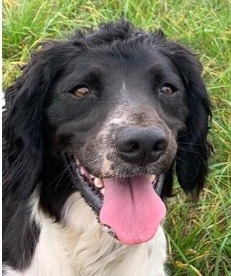 Tilly is a three-year-old Springer Spaniel living on a farm with her two brothers.

Whilst in season, Tilly was accidentally impregnated by her two-year-old half-brother Jack. She was taken to the vets for the requisite two injections to dispel any possibility of conceptual matter.

However, after some weeks, a pregnancy was suspected due to weight gain and mammary enlargement. This was confirmed by a scan at six and half weeks showing one live puppy. Around Tilly’s predicted due date, she was busy nesting, in preparation for her puppy and had become noticeably more matriarchal towards her brothers.

On the fifty eighth day of gestation, Tilly had been unsettled and restless overnight, passing a mucous plug which suggested the onset of stage 1 labour. After four hours, Tilly showed no signs of actively straining to progress to stage 2 labour, so was taken to her vets where she was re-scanned, sadly, the scan showed the puppy had died.

Tilly was given two doses of oxytocin to stimulate abdominal contractions and help towards birth, but contractions did not occur and there was no active progression, so a caesarean section was planned to remove the puppy. However, the uterus had become thin and friable, overlying the dead puppy and was starting to perforate, meaning there was a risk of developing peritonitis. A spay was thought to be the best option, removing the dead puppy and the traumatised uterus to give Tilly the best opportunity for recovery.

After surgery, examination of the puppy and uterus revealed the puppy most likely died forty-eight hours prior to the onset of labour, causing an abortion, rather than normal parturition.

Tilly received intravenous fluids during surgery and for eight hours following surgery. She was given antibiotics (Amoxicillin/Clavulanic Acid) at the time of surgery and for seven days afterwards to prevent infection, as well as an anti-inflammatory/pain relief (Meloxicam) for five days post operatively. Tilly recovered well and returned home fourteen hours after her procedure.

At each visit positive scar changes were observed and mammary engorgement resolved during this time. On day five there was a slight concern, when Tilly escaped and was found immersed in her favourite water trough. She was immediately bathed and the scar frequently cleaned with hydrogen peroxide to prevent the possibility of infection, she was still receiving antibiotic cover for a couple more days.

Other than initially seeming a little perplexed at not being her super bouncy self with her brothers and needing to frequently sit on the couch, Tilly seemed remarkably resilient following such a significant operation. By her third treatment, Tilly appeared physically back to normal and has had no apparent psychological issues due to the loss of her puppy. During treatments she was compliant lying on her back unperturbed and dozing her way through the sessions. Normally Tilly’s brothers would be shut out whilst she received her treatment but on the third visit the dogs were alone in the farmhouse, Tilly knew the procedure and obligingly lay on her back whilst Harold and Jack lay sleeping at my feet, as we know Deep Tissue Oscillation is far reaching! Tilly’s fourth treatment was really for good measure to confirm reports that the scar had all but vanished.

I would like to thank Beth Sheare, Tilly’s surgeon at Damory Veterinary Clinic, Damory Lodge, Edward St, Blandford Forum DT11 7QT, for allowing the use of Tilly’s case notes for the publication of this study in support of Deep Oscillation therapy in wound management.