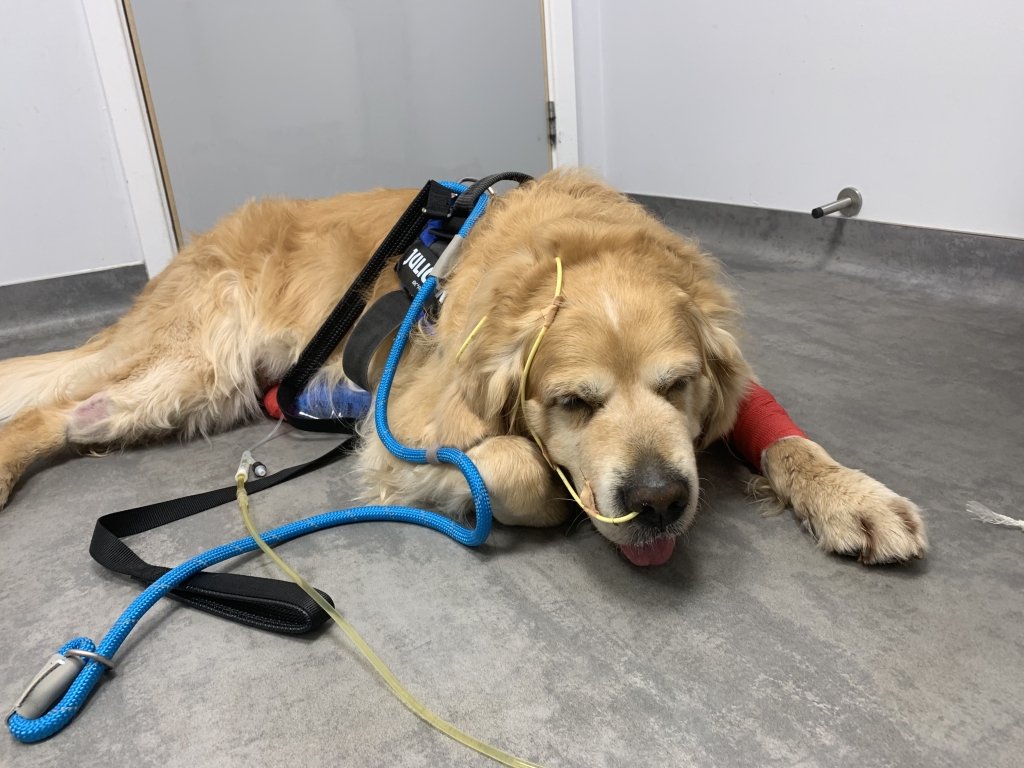 Marley, a victim of CRGV, being treated at Anderson Moores

Vets are urging dog owners to remain vigilant after confirming two more cases of deadly Alabama Rot since the start of the year.

Veterinary referral centre Anderson Moores Veterinary Specialists in Winchester has been leading research into the devastating disease since 2012 and is collating information on all cases and reports of confirmed cases across the country.

Experts at the Linnaeus-owned animal hospital have reported two new cases which have resulted in the death of dogs in Ledbury, Herefordshire, and St Alban’s in Hertfordshire, taking the total since January 1, 2022, to seven.

Anderson Moores has also recently launched a website dedicated to cutaneous and renal glomerular vasculopathy (CRGV), more commonly known as Alabama Rot, which offers advice and information to pet owners, including a map of confirmed cases across the UK.

He said: “We’re very sad to report two further cases of CRGV. Unfortunately, we find ourselves in the time of year when cases are most commonly identified.

“It is understandably worrying for dog owners; however, I must stress this disease is still very rare.

“We’re advising dog owners across the country to remain calm but vigilant and to seek advice from their local vets if their dog develops unexplained skin lesions.”

One of the latest victims was Marlborough, known as Marley, an eight-and-a-half-year-old golden retriever. His owner Rebecca Backhouse, who lives in Ledbury, said that while the family were previously aware of Alabama Rot, the brutality of the disease was shocking.

She said: “We knew about Alabama Rot as a few years ago we lived in Portsmouth and there were some cases nearby in the New Forest. Marley was only a year old then and, while very conscious of the disease, it was one of those things you never think will happen to your dog.

“I first noticed something might be wrong when Marley began licking his back left paw. As I’ve always been aware of CRGV, I searched images of lesions and Marley’s didn’t look anywhere near as bad. In fact, it didn’t really look sore, so we wondered whether he’d cut it on a rock or something like that, as he loves the river.

“We confined him to garden rest as we obviously didn’t want it to get infected when out a walk. He was a bit sad initially but then he seemed fine and enjoyed a tummy tickle, which he always did.

“Then the following day his groin had swollen up to several times its original size and looked terrible, almost as if it was gangrenous. We took him straight to our local vets who were fantastic and referred us immediately to Anderson Moores.

“So, I drove Marley to Winchester on the Thursday evening and they were brilliant. Catarina Amorim, the vet who looked after Marley, was absolutely wonderful and kept us updated constantly.

“He stayed with Anderson Moores for a week and through much of that time he seemed stable.

“However, the duty vet then called us on the seventh day to say he was struggling to breathe, had fluid in his lungs and had taken a real turn for the worse. So, the kindest thing was to say goodbye. It’s such a brutal disease and moves so quickly.

“Marley would have been nine in August. We had him from just nine weeks old and he was a huge part of the family. We had our children after we got him, so they’ve only ever known life with Marley. He’s left us all with a huge void.”

Catarina Amorim, ACVIM Resident in Small Animal Internal Medicine at Anderson Moores, said: “We were all very sorry to lose Marley and our sympathies are with the Backhouse family.

“Marley developed lesions on his prepuce, which is quite unusual, as well as ulcerated lesions in his groin and on his hind paw.

“He also developed generalised oedema (swelling), which resulted in the swelling his owners had originally seen, and pulmonary oedema (fluid in the lungs).

While Alabama Rot is often fatal, Mr Walker said the best chance of recovery probably lies with early and intensive veterinary care which may be best provided at a specialist facility.

He said: “We have been at the forefront of research into CRGV for almost a decade and have witnessed first-hand the often-devastating effects of the disease.

“Treatment largely revolves around intensive management of the sudden onset kidney failure and, sadly, with our current understanding of the disease, is only successful in around 10 per cent of cases.”

Mr Walker added that he hoped Anderson Moores’ dedicated new CRGV website would be a useful tool in raising awareness of the disease among dog owners.

He said: “In launching this new website, we aim to give pet owners as much information as possible about CRGV,” he said.

“We hope the confirmed case map will also prove useful. Although an environmental trigger has not been definitively proven, the seasonality of the disease makes it eminently possible and the map allows everyone to see the location of confirmed cases.”