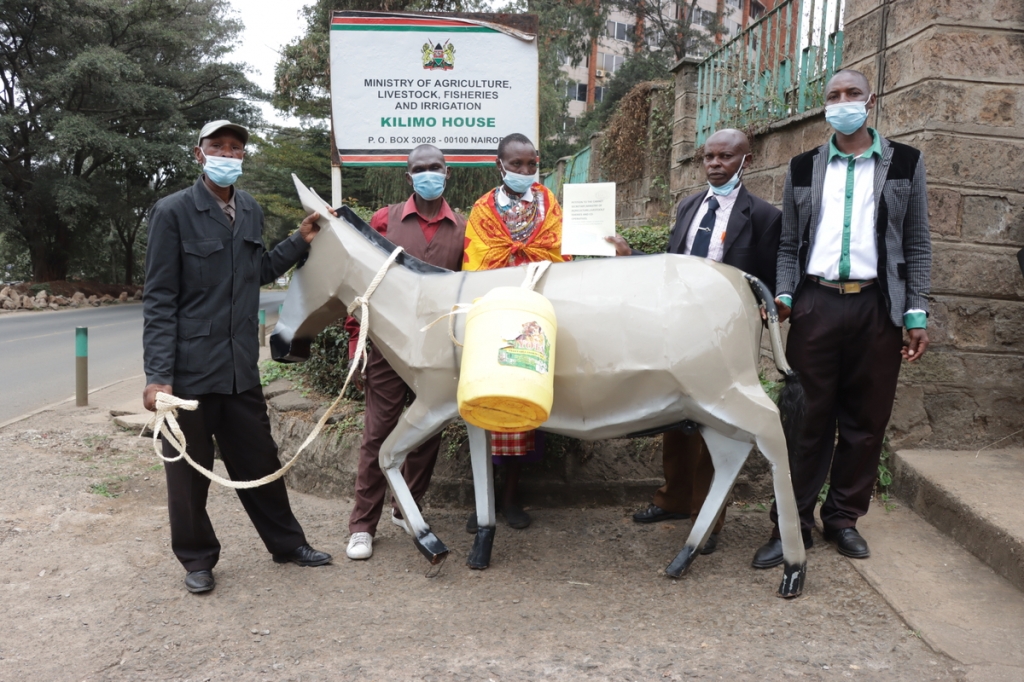 A petition signed by over 30,000 donkey owners was delivered to the Kenyan Government on Thursday 26 August, demanding a ban on the slaughter of donkeys for skin and meat, following this year’s reversal of the February 2020 ban.

The petition, which was signed by owners across 28 counties in Kenya, was delivered to the office of Cabinet Secretary Peter Munya, Ministry of Agriculture, Livestock, Fisheries and Co-operatives, by the Alliance for Donkey Workers of Kenya (ADWOK), with support from Brooke and The Donkey Sanctuary.

Addressing the Ministry on Thursday, donkey owner Joseph Thendu said: “Commercialised slaughter of donkeys in Kenya has led to increased donkey theft, loss of donkey-supported livelihoods, poaching and bush slaughter […] Right now, the best option to prevent and protect the donkey population from sharp decline, and loss of socio-economic livelihoods of donkey-dependent communities, is to ban donkey slaughter.”

There are currently four slaughterhouses in Kenya, largely driven by the rapid growth in popularity of ejiao, a traditional Chinese medicine made by boiling down donkey skins.

Peter Munya had been instrumental in introducing a ban on the slaughter of donkeys in February 2020 after a 2019 report by KALRO predicted that donkeys faced extinction in Kenya within a few years, should the current trajectory of slaughter continue. However, the ban was quashed by a Kenyan court in May 2021 after slaughterhouses demanded a review, claiming that it violated worker rights. The slaughterhouses still remain unlicensed for now, but this could change unless an official ban is re-introduced.

Dr Raphael Kinoti, Regional Director at Brooke East Africa, said: “The decision to overturn the donkey slaughter ban in Kenya was terrible news for donkeys, and hugely distressing for donkey owners, many of whom fear their donkeys will be stolen from them, and in turn their livelihoods. We are hopeful that this petition will amplify the voices of those owners and alert the government to take urgent action to once again ban this cruel trade.”

Sian Edwards, Campaigns Manager (Skins) at The Donkey Sanctuary said: “The Kenyan Government has made clear its view and now its people have spoken in their thousands. The message is simple - Kenya’s donkeys will not be slaughtered. Donkeys need to be protected from businessmen and their lives preserved for the millions of people who depend on them for a livelihood.”

There are approximately 1.2 million working donkeys in Kenya today, compared with 1.8 million a decade ago, according to government data. They are heavily relied upon by communities, especially women, to transport water and farm produce, as well as commercialised goods.