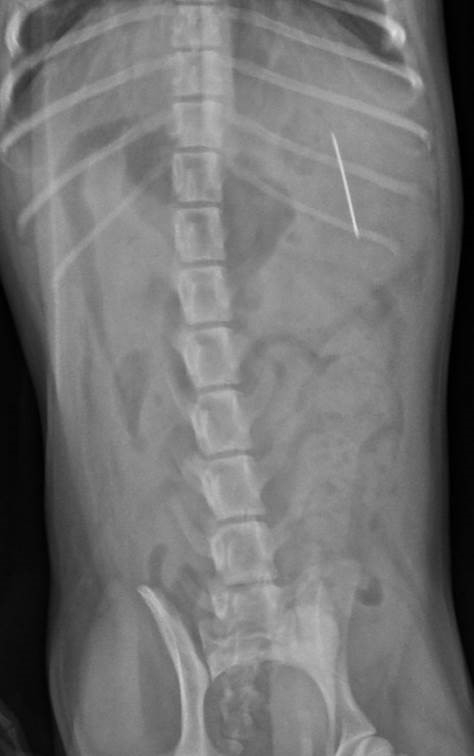 A leading referral vet centre came to the rescue of an emergency admission after treating a pug puppy who had swallowed a large sewing needle and thread.

Cute little Doug the pug was taken to Wear Referrals, in Bradbury, County Durham, during lockdown after his worried owners had taken him to their local vet, who carried out x-rays that revealed the pet had swallowed a needle which had become lodged in his stomach.

Requiring specialist treatment and fearing the possibility of surgery to remove the dangerous foreign object, Doug’s owners were relieved to hear state-of-the-art small animal hospital Wear could safely remove the needle and thread without putting him under the knife.

She said: “Little Doug had somehow managed to swallow quite a large needle and attached thread, which obviously caused his owners considerable worry.

“We anaesthetised Doug on arrival and removed the needle and thread from his stomach via endoscopy, which is a flexible tube with a camera on the end and avoids the need for surgery.

“Doug coped exceptionally well with the procedure and after an overnight stay with us so we could keep him under observation, he went home to his family the next day.”

The hungry pup’s grateful owner Sonia Wheeler, from Sunderland, said: “I was sewing at my dining room table when the needle dropped to the floor. As I attempted to retrieve it, Doug darted straight to the needle and picked it up in his mouth.

“Panic ran through me as he’s a typical puppy who swallows anything you attempt to take from him but it was gone before I knew it.

“I was met by Chiara on arrival at Wear and, although she was wearing full PPE, Doug was not phased and was his usual bouncy, playful and ever-so-charming self, as though he’d done nothing wrong.

“I, on the other hand, was very worried! Chiara explained the procedure she intended to perform with confidence and dedication, and although all procedures carry some risk, she put me at ease instantly.

“The opportunity for him to have the needle removed without having surgery was fantastic to hear.

“Doug has recovered remarkably well and is back to his cheeky little self, with a love of cuddles, sunshine and the outdoors.

“Doug returned home the following day and his recovery was very quick thanks to not needing surgical intervention, I cannot thank Chiara and the team at Wear enough, they were simply amazing.

“Considering it occurred at the height of the Covid-19 lockdown, the response and treatment for Doug was exemplary

“Doug is still very much the lovable little villain of the house and you need eyes in the back of your head with him, but one we could certainly not be without.”

For more information about Wear Referrals, which is part of Linnaeus, visit www.wear-referrals.co.uk or search for Wear Referrals on Facebook.