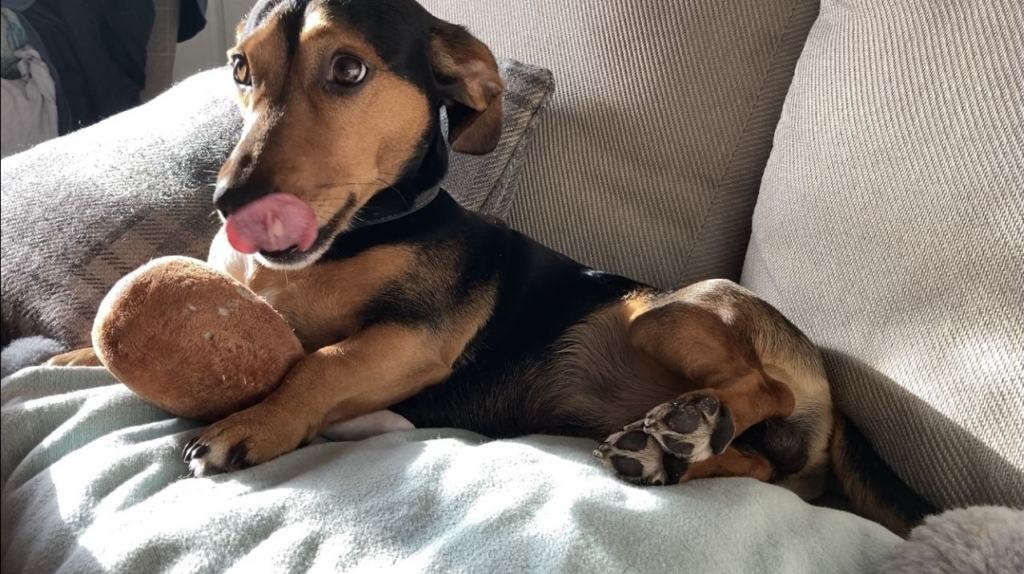 Eddie's Lifesaving Lick Of The Lips Leads To Pioneering Cure

A lazy lick of the lips has helped save the life of a six-year-old dog in a remarkable case undertaken by one of the UK’s leading animal hospitals.

Sarah Furlong, from Guildford, was videoing her dachshund-cross, Eddie, in a bid to capture the perfect shot of him to post on social media.

Instead, she captured an image of a worrying growth on the underside of his tongue, something which turned out to be a rare and life-threatening mast cell tumour.

Sarah, and her partner Tim, were devastated to be told Eddie could only have nine months to live due to the invasive tumour but their fears quickly turned to cheers after he underwent pioneering electrochemotherapy treatment at Linnaeus-owned North Downs Specialist Referrals (NDSR) in Bletchingley, Surrey.

Sarah said: “It really is unbelievable and we are so relieved. We’ve gone from fearing Eddie might only have nine months to live, to him now being in full remission.

“We can’t thank Gerry and NDSR enough for what they’ve done for us. Eddie’s been given a new lease of life and is back chasing tennis balls and loving his walks on the Surrey hills.”

Sarah admitted it had been a traumatic and worrying ordeal since she first spotted the concerning growth while going through her video footage.

She said: “I had paused the video so I could grab the perfect shot of Eddie with his tongue out licking his lips. That’s when I noticed something on the underside of his tongue.

“Straightaway I thought it wasn’t right and shouldn’t be there, and immediately got in touch with our vets.

“When I learned it was a rare and dangerous mast cell tumour I was in shock. It really scared me. We’ve had Eddie since he was eight weeks old and, at that point, thought we were going to lose him.”

Gerry, an RCVS and European specialist in oncology and clinical director at Linnaeus-owned NDSR, was reluctant to proceed with invasive and potentially damaging surgery, so instead recommended a course of pioneering electrochemotherapy.

It’s a procedure in which a bespoke probe sends an electric pulse to the tumour to change the outer layer of the cancer cell, making it easier for the chemotherapy to get inside.

Gerry said: “We felt electrochemotherapy would be an appropriate treatment as it enables us to target chemotherapy to a site of specific need, meaning we could deliver a massive treatment to the tongue without causing loss of tongue tissue or function.

“Eddie received three treatments in total and it was a remarkable success, as the nodule had disappeared within two weeks of the first treatment.

“There was a slight discolouration to the underside of his tongue after the first treatment but even that has resolved now.

“I can’t be sure he has been cured but he is most definitely in remission and I hope that remission will be sustained for a good long time.”

Eddie’s successful electrochemotherapy sessions mean he’s back living life to the full again but Sarah is still keeping a close eye on him, especially his tongue.

Gerry confirmed: “We can regularly see just how good Eddie’s tongue function remains because Sarah very kindly sends me periodic updates, frequency determined in part by how often she can be quick enough with the camera to snap a good image.

“We will maintain contact with Eddie so we can assess him properly under anaesthesia again if there is cause for concern and, having seen how his tongue has been unaffected by the treatment, I am confident the treatment could be repeated if the need arose.”

For more information visit https://www.ndsr.co.uk/home or search for NDSR on social media.