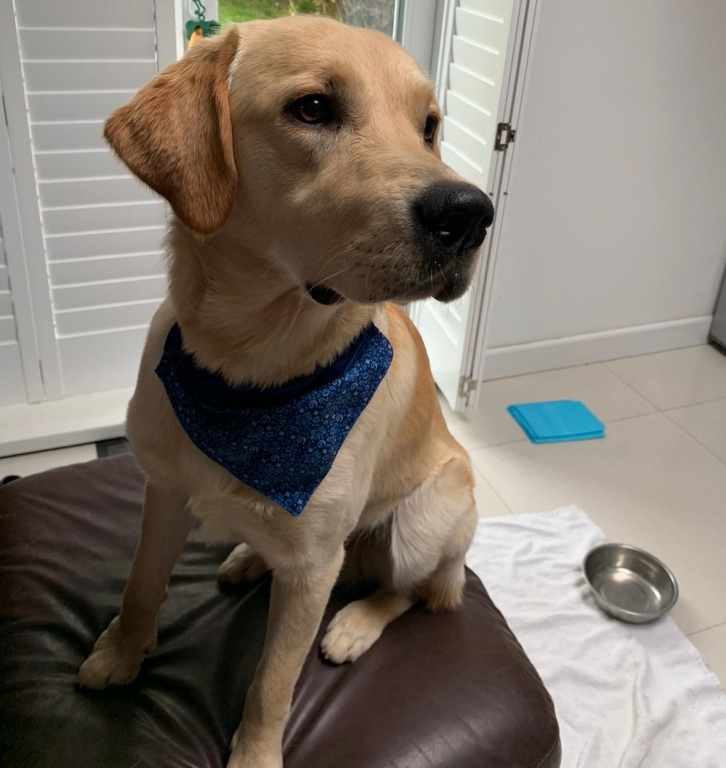 Howzat For A Close Shave?! Puppy Bounces Back Thanks To Anderson Moores

A mischievous labrador puppy has bounced back to full health after pioneering specialist surgery to remove a toy ball it had swallowed.

Eight-month-old Benji had got himself into trouble on a trip to the park, racing off to interrupt a children’s game of cricket by pouncing on the ball and running away.

By the time Benji had been collared, he had already swallowed the ball and had to be referred to the expert team at Linnaeus-owned  Anderson Moores Veterinary Specialists in Hampshire to have the troublesome toy removed.

Owner Natali Bernasconi, from Wandsworth, said: “It was quite a big ball but very squishy, so that’s how Benji was able to swallow it.

“Getting it out was the problem and we were very concerned because he was so young. That’s why we took him straight to the vets, who referred him for specialist care at Anderson Moores.”

Matteo Cantatore, an RCVS and European specialist in small animal surgery, and Kate Holroyd, a small animal surgery resident, took charge of the challenging case and needed to perform the innovative surgery to retrieve the ball, which had become stuck in Benji’s stomach.

Matteo explained: “The ball was too big and slippery, which prevented successful retrieval in the usual way via an endoscope, where we pass a thin tube containing a tiny camera and tools down the food pipe and into the stomach.

“The remaining options were a normal open operation or single incision laparoscopic surgery (SILS), which is a newly-devised keyhole approach that would retrieve the ball in a minimally invasive way.

“The SILS port allows surgery via a single small incision instead of the usual two to three incisions used in traditional keyhole surgeries.

“The benefit of the SILS approach is that it is generally less painful, there is less chance of infection or other complications, and patients recover far quicker, with much less of a scar.”

Matteo added: “A 2.5cm incision was made into Benji’s abdomen and a SILS port inserted. His stomach was visibly dilated by a rounded object.

“I then used a set of Allis tissue forceps to grasp what was a sizeable object and safely retrieve it. The squishy nature of the ball facilitated removal through a very small abdominal incision.”

The offending object turned out to be an orange ball with a smiley face on it but swallowing it certainly hadn’t been a laughing matter for Benji.

Happily, thanks to the skill and expertise of Matteo, Kate and the team at Anderson Moores, which is owned by Linnaeus, the playful puppy has now fully recovered from his stomach-churning ordeal.

A delighted Natali said: “Matteo, Kate and everyone at Anderson Moores were very good and it was great to have Benji home so quickly after his operation. He’s recovered really well and is his usual happy self again.”

For more information on Anderson Moores Veterinary Specialists, which is part of the Linnaeus, visit www.andersonmoores.com/home.