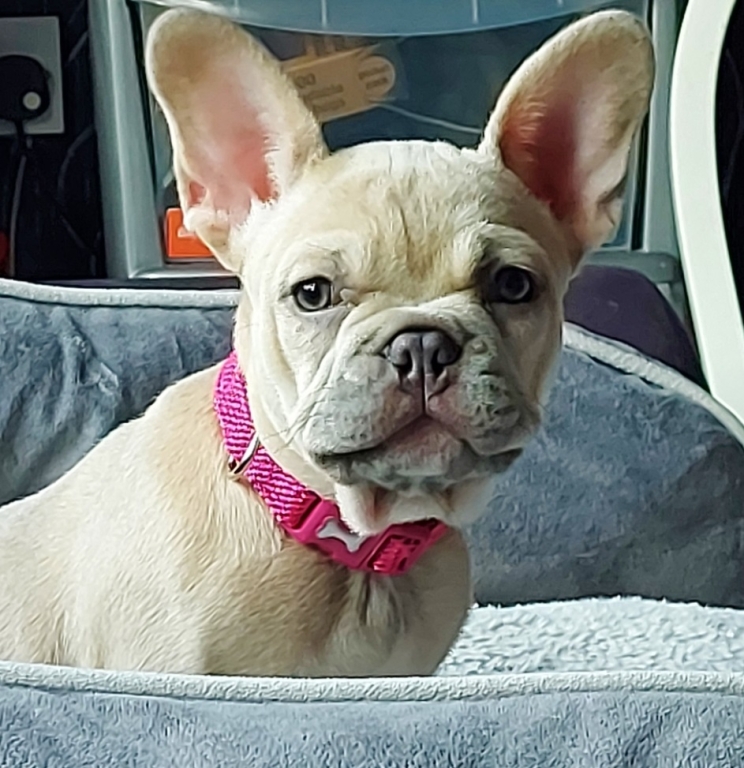 A puppy called Skye was left feeling blue when she suffered a serious fracture to her leg after falling down a set of stairs.

The four-month-old French Bulldog needed corrective surgery at the renowned Kentdale Referrals in Milnthorpe, Cumbria, which is owned by Linnaeus.

Kentdale is recognised as one of the UK’s leading animal hospitals for serious orthopaedic, spinal and soft tissue cases and small animal specialist Graham Hayes took charge of the case.

Graham explained: “Skye was referred to us at Kentdale after she fell down some stairs and became lame on her left foreleg.

“She was sent for X-rays which confirmed a unicondylar humeral fracture of the left leg.

“The injury was serious and required surgery to place two screws into the bone to stabilise and strengthen the fracture.

“Surgery went well and Skye was allowed home after recovering uneventfully from the two-hour operation.

“She still needed three months of careful rest and recuperation, though, and we gave her owners strict instructions to limit exercise for the next six weeks to allow the fracture to begin to bond.

“After those six weeks had elapsed, we did follow-up X-rays and they showed clear evidence of good healing of the fracture and she will be able to return to normal exercise and activity 12 weeks after the operation.”

Skye’s owner Gill Edmondson, from Carnforth, said: “Skye jumped down the stairs and straight away we knew something was wrong.

“She fell onto her elbow and screamed, so we took her to our local vets and they kept her overnight before referring her to Kentdale the next day.

“Obviously, we were devastated to learn she had suffered a serious fracture and needed surgery to repair the damage because she was still a baby.

“Kentdale were so supportive, though, and so quick, efficient and caring so we never really looked back.

“Now, Skye’s made a full recovery and is running and jumping everywhere, so we would definitely recommend Kentdale to other pet owners as they were absolutely fantastic throughout.”