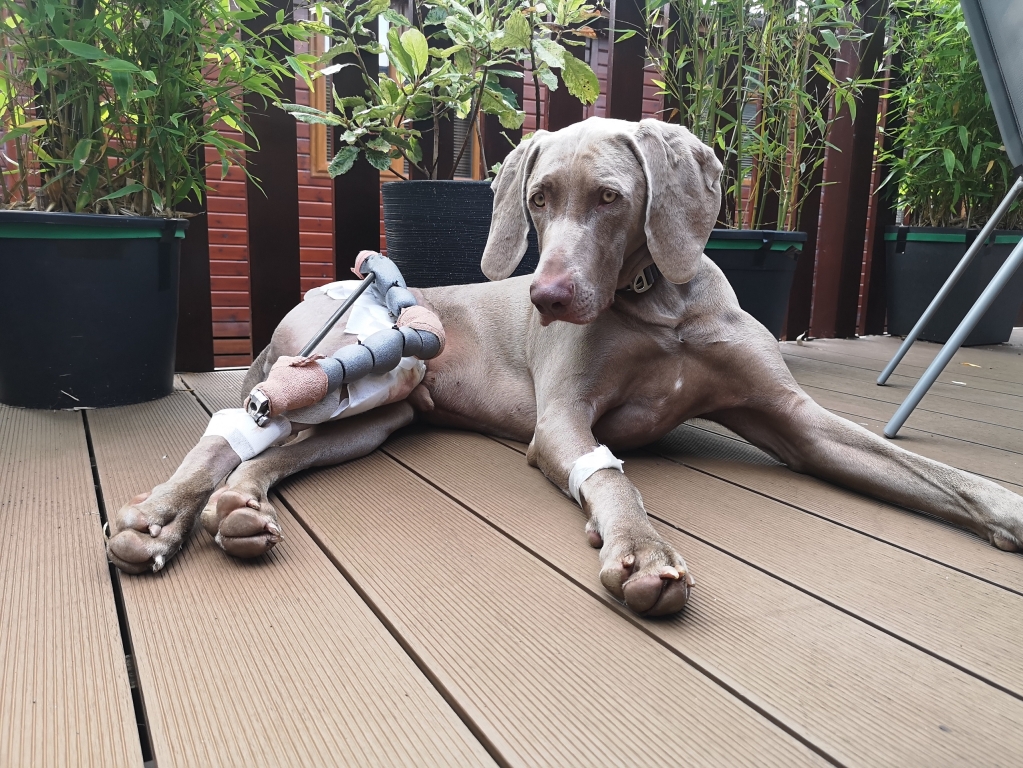 Kentdale To The Rescue After Dog Suffers Horror Holiday Injury

A dream trip to the Lake District turned into a nightmare scare for a dog owner whose two-year-old pet was seriously injured while romping across the Cumbrian hills.

Martin Sands, from Lutterworth in Leicestershire, was left horrified when Weimaraner Max fractured his knee cap after careering down a steep hill and crashing into a wooden stake.

His first challenge was to carry Max off the hillside before then attempting to find an expert vet to look after him when they were 150 miles away from home.

Martin explained: “It was the second day of a 10-day break to the Lakes and we were up on the hills when Max suddenly went running off down the hill after something.

“I called after him but Max wasn’t listening. Then I heard him yelp and when he didn’t come back, I realised something must be wrong.

“I went down after him and discovered him by a wooden stake in the ground which had stopped him in his tracks.

“I was very concerned. I could see he was hurt and my first thought was ‘how am I going to get him down off the hill and into the car’.

“Being new to owning a dog, we didn’t really know how it was going to end – especially when the local vet couldn’t fix the problem and we had to be referred to a specialist vet practice.”

Max was transferred to the well-renowned animal hospital Kentdale Referrals in Milnthorpe, Cumbria, for emergency surgery to repair his fracture.

Gemma explained: “The owner told me Max had run into a wooden post and X-rays confirmed he had a fractured patella (knee-cap).

“Patella fractures can be difficult to manage, with a high risk of it not healing, so this was not a straightforward case.

“Max was taken to surgery where we made an internal fixation of the patella using wire, tension bands and a tibial patella suture.

“Then an external fixator was applied to immobilise the joint to stop any movement or pull from surrounding muscles which could cause the fixation to fail.

“The external fixator remained in place for six weeks and two weeks later he started an intense course of physiotherapy and rehabilitation.”

A delighted Martin said Max had made a fine recovery and you would barely know he’d had such a nasty accident.

He said: “Max is good, to the point where you wouldn’t know he had a serious injury if it wasn’t for the scars on his leg. He is still having physio which should be ending next month and he’s made really good progress.”

Martin was full of praise for Gemma and the Kentdale team for all the care and support they delivered at such a worrying time.

He added: “Being new to dog ownership, we were going into the unknown and we were also on holiday which didn’t help.

“But Kentdale were absolutely amazing, from the front of house team right through to Gemma the vet who operated on Max.

“They made everything straightforward and we felt safe in the knowledge that Max was in great hands. I wouldn’t hesitate in recommending them to other dog owners, even though we live 150 miles away.”