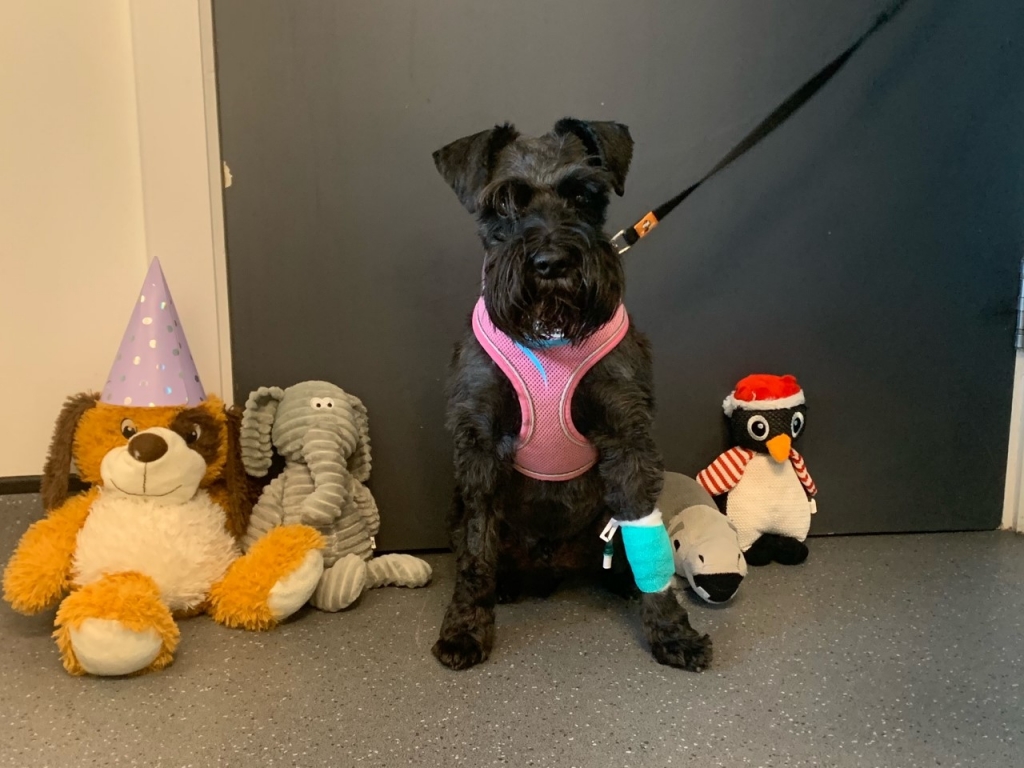 Vets at a leading Essex referral centre have refused to allow a dog’s cancer treatment prevent him from celebrating his seventh birthday.

Most importantly, the Linnaeus-owned specialist-led centre is also optimistic it has given the miniature schnauzer the best possible present – a new lease of life after he completed a four-week course of radiotherapy.

Sarah Mason, Southfields’ head of clinical and radiation oncology, explained: “Otis came into hospital for radiation therapy treatment on his seventh birthday, so we decided to throw a party for him with a few surprises”.

“The nurses arranged a specially-made birthday cake, complete with the number seven on it, and some cuddly toy friends as party guests.

“The best present, though, is that he is now clinically much improved. An MRI scan had identified a potentially life-threatening brain tumour – a caudal fossa meningioma – which needed immediate attention.

“Unfortunately, the tumour was so large and in such a difficult location that it was not ideal for surgery, so we started Otis on a month-long course of radiation treatment to shrink the tumour instead”.

“It seems to have worked very well. Otis will have a repeat scan in a few months to check his progress but his owner is very happy.”

Otis was referred to Southfields after his worried owner noticed he had started behaving strangely and uncharacteristically at home.

Bobby Bajaj, from Ealing, West London, said: “Otis was becoming vacant and confused, and even got lost in the park where we walk every day, so I knew something was wrong.

“That’s why I asked my local vets for a referral to see a specialist, although I was still completely thrown when a scan revealed Otis had a tumour on the lining of his brain.

“I honestly thought it was the end for him and me, that is until I spoke with Sarah Mason at Southfields. She was amazing. From the moment I first spoke to her, I had absolute confidence and total trust in her.

“Not that it was good news. Sarah said she couldn’t operate to remove the tumour because it was so close to his spinal cord. She also ruled out chemotherapy as an option and my heart sank.

“However, she said the way forward was a course of radiotherapy and that, because of his age, she believed Otis would respond very well – and he has done.

“The fact Sarah and the Southfields’ team even went to all the trouble to throw a birthday party for Otis proved to me he was in the right place and being care for by the right people.

“They even sent me photos of him with his specially-made cake and some toys, and I just thought that was an absolutely unbelievable touch from the Southfields’ team.”

Southfields Veterinary Specialists is dedicated to providing the highest standards of veterinary care for pets and providing a seamless service to owners and referring vets.

For more information, go to www.southfields.co.uk or search for ‘Southfields Veterinary Specialists’ on social media.