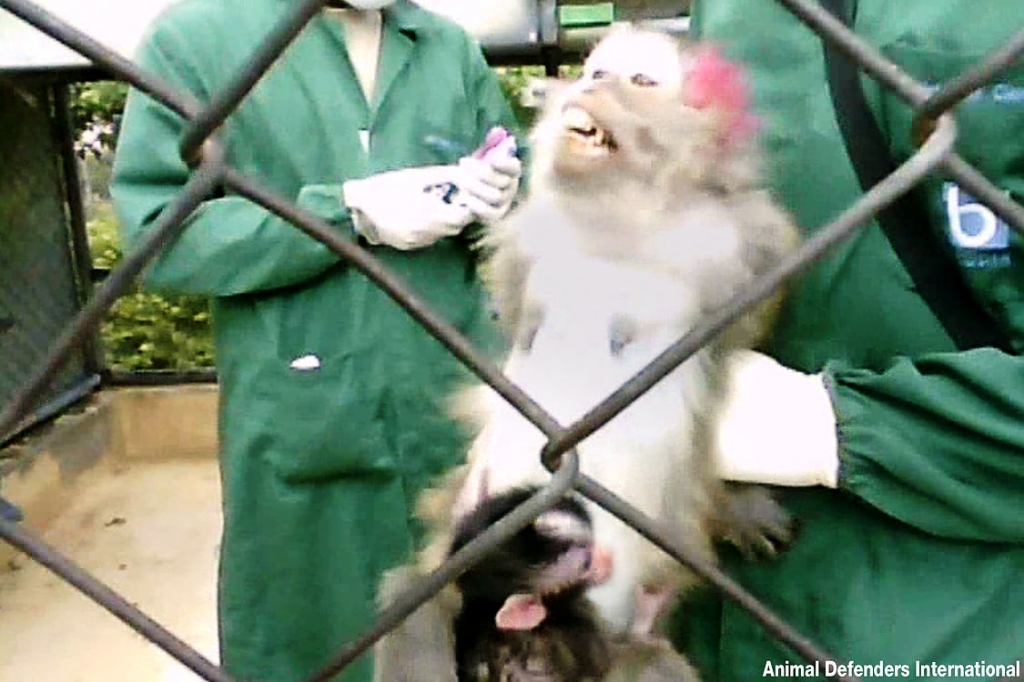 Ahead of International Primate Day on 1 September, Animal Defenders International (ADI) is calling on the UK Government to explain the huge increase in the number of monkeys born to wild-caught parents used in research.

A total of 246 offspring of wild-caught monkeys, known as “F1” primates, their parents “F0”, were used in British labs last year, accounting for some 10% of all primate use.

Under EU law, the use of F1 primates is being phased out and will not be permitted after November 2022. With no F1 primates used in British labs during 2014-2016, and one individual used in 2017, it seemed that the UK Government was moving towards this deadline.  There are concerns this could spiral out of control if there is de-regulation and an abandoning of EU rules after Brexit.

ADI President Jan Creamer said: “The public will be horrified to learn that not only is Britain still a major primate user in Europe but it allows researchers to use monkeys whose parents have been taken from the wild and used as breeding machines too. The UK is effectively encouraging dealers in Vietnam and Mauritius to keep stocking their breeding factory farms by trapping wild monkeys.  If, like ADI, you think this is wrong, please join our call for primate tests to be phased out.”

A total of 2,606 long-tailed macaques, including the F1 primates, were imported into Britain last year, 2,064 from Mauritius and 542 from Vietnam. ADI has conducted investigations of lab monkey breeders in both countries. One of the biggest suppliers in the world, in Mauritius ADI filmed baby monkeys being torn from their screaming mothers to be tattooed, pregnant monkeys manhandled and pinned down, and monkeys swung by their tails at one of the key breeding facilities, Biodia.

At supplier Nafovanny in Vietnam, ADI filmed monkeys living in deplorable conditions, with some animals confined to small rusting cages which were in a state of collapse. The Vietnam footage was years after the Home Office had threatened to withdraw the supplier’s licence but allowed it to continue supplying British labs after it was claimed improvements had been made.

More than a decade ago, the European Parliament passed Written Declaration 40/2007, calling for a timetable to replace the use of primates within the EU, but a strategy has yet to be published.

The UK is sadly one of the largest primate users in Europe, with latest figures showing 2,472 individuals were used in British laboratories, an increase of 12%.

More than 80% of the public consider the use of primates to be unacceptable, providing a mandate for government and funding bodies to replace their use with advanced, scientific, human relevant methods. In response to ADI’s call for the UK Government to phase out primate use, the Home Office has stated that it has “no plans to phase out the use of primates in animal research.”

Most primates (2,148) were last year used for regulatory safety testing of substances. For such tests primates will typically endure force-feeding or injections of experimental compounds and full body immobilisation in restraint chairs during experiments. Side effects can include rectal prolapse, vomiting, blocked lungs, collapse, self-mutilation and death.

Due to species differences, tests in primates and other animals have been shown to produce misleading results – replacing primates with more sophisticated human-based techniques provides results which are more relevant to people.

Signatory and long-term supporter of human-relevant methods of research Joanna Lumley said: "With a growing number of humane, modern methods available, governments and industry must act and adopt their use."