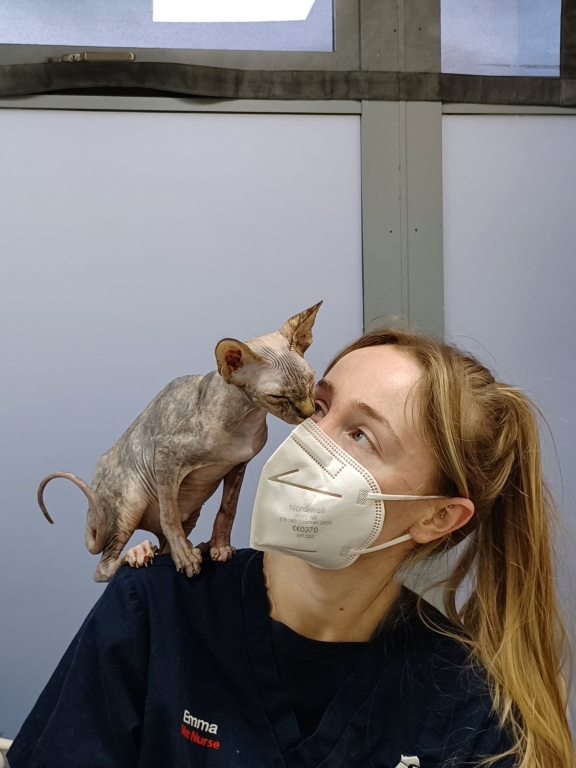 Dobby, a five-month-old Sphinx kitten has recovered from a double dose of medical misfortune thanks to expert treatment at MyVet Firhouse


A kitten’s life was left hanging in the balance after she was stricken by a dangerous double dose of medical misfortune.

MyVet veterinary surgeon Emma Birch sent Dobby for stomach X-rays which revealed that Dobby had a serious blockage in her intestines which required urgent surgery.

“This creates a telescoping action which often blocks food or fluid from passing through. It also cuts off the blood supply to the part of the intestine that's affected.

“During surgery we discovered Dobby’s intussusception had caused part of the intestine to die, so we had to remove a section of the intestines and reconnect the healthy parts.

“Surgery was long and difficult, and Dobby’s recovery was slow. It was touch and go for a while but she turned a corner the next day. She started to eat nicely and seemed more comfortable.

“Just as we thought she was out of the woods, though, she became severely anaemic. We did a test which revealed her red blood cells were low – just 15 per cent, way below the 25 per cent borderline figure.”

“That was particularly challenging to treat alongside managing her normal post-operative care.

“Dobby then suffered a surgical wound infection and breakdown, which was an added complication controlled with open wound management, bandaging and antibiotics.”

Dobby’s survival was back on a knife-edge when her blood count plunged further, with the two vets suspecting the kitten’s red blood cells were attacking her immune system.

Emma continued: “Dobby’s levels dropped to 10 per cent and she was really in the danger zone. If they’d dropped much lower, we would have had to think about putting her to sleep.

“We were stuck between a rock and a hard place. We wanted to put her on a steroids trial but it was so close to surgery and there were real risks involved.

“She went from strength to strength and her owners are delighted that she is doing really well.

“It’s very rewarding when owners tell you they are very happy with the service provided, and that everyone was very professional and friendly.

“We always want to deliver the very best care and treatment for our pet patients and to support their owners through the whole process.”