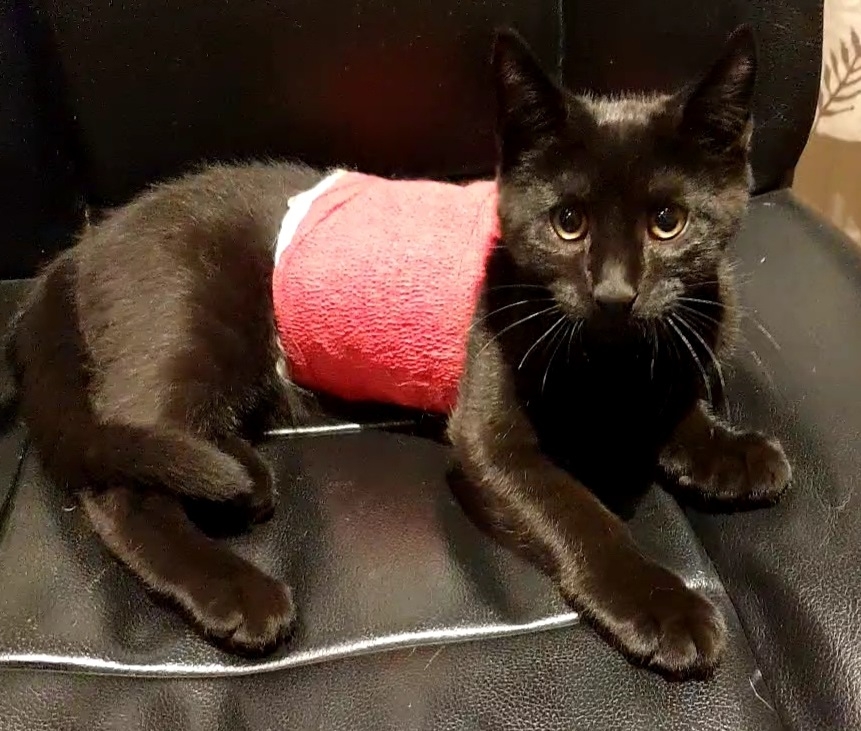 A top specialist at an award-winning animal hospital has transformed the life of a severely deformed kitten found abandoned in the road, by carrying out a rare life-changing operation.

The tiny kitten was just days old when he was discovered by the roadside, lying alongside the dead bodies of his mother and the rest of the litter.

The sole survivor, named Peanut by his rescuers, was still in dire danger, as a severe deformity of the chest was compressing his heart and lungs, compromising his ability to breathe and restricting his growth.

Charitable donations paid for Peanut to be treated at the renowned Linnaeus practice, Wear Referrals, in Bradbury, County Durham, with highly-experienced clinician Jon Hall taking charge of the challenging case.

Jon, a RCVS and European specialist in small animal surgery, said: “Poor Peanut was just eight weeks old when he first came to Wear and he’d already had a tragic start to life after the death of his mother and the rest of her litter.

“He was also struggling with a severely deformed chest, which frequently left him breathless and unable to cope with any level of activity.

“If he had not been treated, his deformity, called Pectus Excavatum, would definitely have further limited his ability to breathe and, I suspect, his life expectancy.”

Jon and the team at Wear, which also offers a 24/7 emergency and out-of-hours service, agreed the only option was for surgery but impressed upon Peanut’s owners the surgery was not without risks.

Jon explained: “The operation to correct the problem is exceptionally rare and can result in the death of kittens, so this was an extremely serious case.

“My own cats have this problem, although to a much lesser extent, and whilst ‘Tick’ and ‘Flea’ are now both 16, I think they might have grown bigger if they had surgery when they were tiny.”

Peanut, a black domestic shorthair cat, was still just 12 weeks old when the intricate, corrective surgery was carried out.

Jon said: “We had to make a splint out of casting material which would fit on to his chest but still be able to accommodate him growing.

“We then inserted a series of stitches, carefully manouvering our way around the breast bone and the ribs and taking care that the needle didn’t puncture vital organs such as the heart and the lungs.

“All those stitches then had to be pulled to open up his rib cage and pull his chest into a more normal position and then be tied to the splint.

“Everything went very well and, as soon as the surgery was done, Peanut was much more active, better able to meow and grew more quickly.

“He is now four-and-a-half months old and even I am amazed at how well he is doing with the splint now off! He really is a special little guy.”

Peanut’s grateful owner Ashley Wemple, who has worked as a vet nurse since 2001, first saw him when he was taken into the vet practice where she works by the RSPCA at just a day old.

She said: “I first came across Peanut as the RSPCA wanted to make sure he hadn’t been injured in the accident that sadly took the life of his mum and siblings.

“My colleague Helen Spry and I agreed to take him on as a foster kitten and hand rear him. We’re both vet nurses and often share the responsibility of hand-rearing orphaned kittens.

“As Peanut grew and became more active, I noticed he became tired easily and was often short of breath. An examination revealed the deformity and we knew corrective surgery would likely need specialist intervention, so quickly began fundraising – we even came up with the hashtag #givepeanutachance!

“We had real concerns for Peanut’s quality of life. Thankfully, Jon at Wear became aware of the case and, once we found out about his special interest in the condition, we knew he was the surgeon for the job.

“Peanut is doing fantastically now and is definitely one of a kind! He is able to play and exercise just like any other kitten, without any problems. He really is so lucky to have fallen into the hands of multiple veterinary professionals who have been able to help him through so many obstacles.”