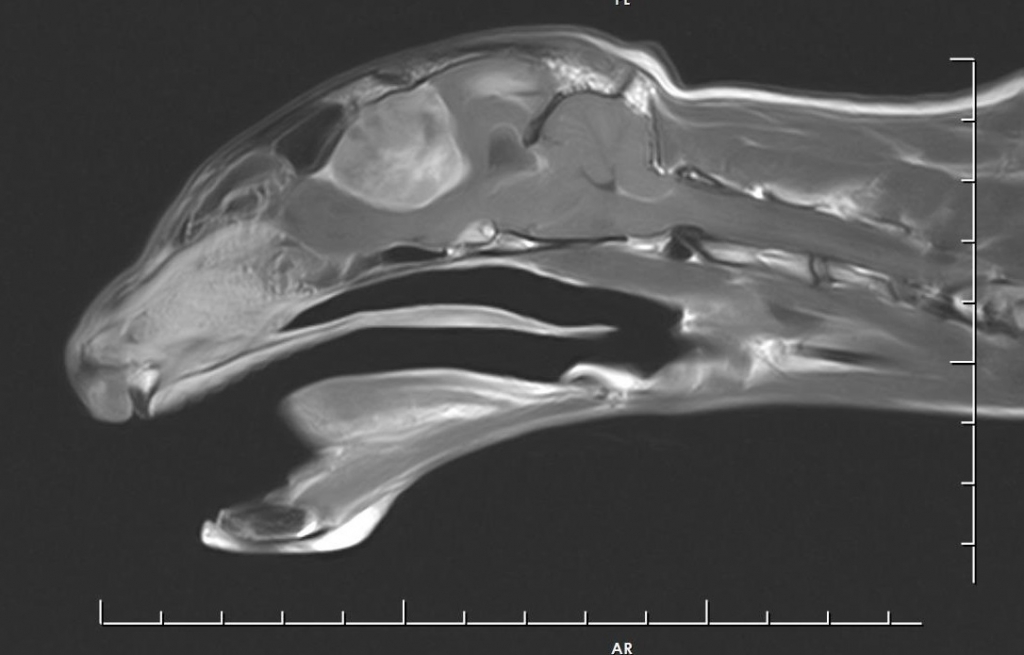 Specialist vets at a leading UK animal hospital discovered that a giant brain tumour was the cause of a cat’s episodes of collapses and general unsteadiness.

Neurology specialist Simon Bertram, from the Linnaeus-owned Cave Veterinary Referrals near Wellington in Somerset, described it as one of the largest brain tumours he’d ever encountered in a cat.

He also revealed it needed a challenging three-hour operation to remove the huge mass, called a falcine meningioma, which happily resulted in the 17-year-old patient, called Mozzarella, making a remarkable recovery.

The mass was around a third of the size of Mozzarella’s brain.

Simon said: “Mozzarella arrived at Cave with a two-week history of unsteadiness and compulsive circling to the left.

“An MRI scan revealed a very large mass between the forebrain hemispheres which we suspected was a large falcine meningioma and we offered to operate.

“Mozzarella underwent a modified bilateral transfrontal craniectomy to remove the meningioma and it was a challenging surgery as the tumour did not want to come out without a fight.”

There were also some commonly-encountered complications post operatively with Mozzarella initially having limited vision and experiencing a seizure but both have now been resolved, leaving Mozzarella’s owner both relieved and delighted.

David Nilsson, from Princetown, Devon, said: “We were extremely worried when the MRI scan revealed a very large brain tumour, which one of the vets said was the largest brain tumour he’d ever seen in a cat.

“Our first reaction was to ask whether it was operable and when we were assured it potentially was, we said to go ahead with the surgery.

“Everything’s gone far better than we expected. He's now running around with great enthusiasm, chasing his laser pointer and chasing other cats out of the garden.

“His appetite has returned, and you'd probably not guess how elderly he was unless you were told.

“We’re very happy and would definitely recommend Cave to other pet owners. Mozzarella was cared for very well throughout and the vets were very good at explaining all the procedures and risks.”