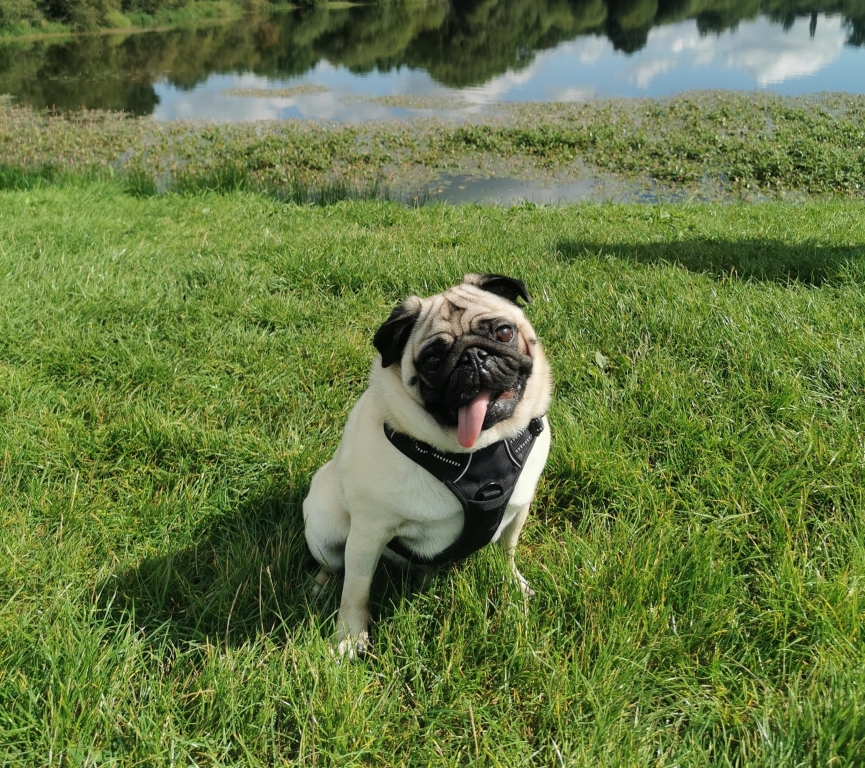 Frank the Pug, who had spinal surgery at Northwest Veterinary Specialists in Cheshire.

Two Pugs crippled by severe compression of the spinal cord are back on all fours again after successful surgery at a Cheshire animal hospital.

Six-month-old Lily-Bet and five-year-old Frank were both referred for specialist treatment at Linnaeus-owned Northwest Veterinary Specialists (NWVS), in Runcorn.

NWVS specialists Luca Motta and Matt Smith teamed up to tackle the challenging cases, with MRI and CT scans producing dramatic images illustrating the clear cause of the problem - acute curvature of the spine.

“Both were very bright, alert and playful but they could not walk properly, although the good news was that they did not seem to be in any discomfort.

“Lily-Bet, in particular, was quickly deteriorating and after detailed conversations with both owners, it was decided to proceed with surgical therapy as medical therapy was unlikely to lead to a successful and satisfactory outcome.”

Describing the surgery, Luca added: “We carried out a transthoracic vertebral distraction and stabilisation using monocortical screws and polymethylmethacrylate in both cases.

“This technique was developed by Massimo Baroni, an Italian veterinary neurosurgeon, and involves a series of screws being carefully and correctly placed in the vertebrae adjacent to the hemivertebra, along with distraction and partial correction of kyphosis.

“The procedures went well and both Lily-Bet and Frank made very good recoveries.

“Post-operative CT exams confirmed the accurate positioning of the screws and the partial correction of the kyphosis and the dogs were each discharged three days after surgery.

“They’ve continued to improve every day. Lily-Bet is now back to normal and walking very well again and Frank is also markedly improved. We’re very pleased with the outcomes.”

Frank’s owner, Dena Barton, from Macclesfield, Cheshire, said giving the go-ahead for the operation was the “scariest decision we have ever had to make” but she’s delighted with the result.

Dena said: “We realised that there was a problem with Frank’s back legs in 2021 but we originally thought it was a knee and weight problem so we started to manage his weight.

“There were a lot of tears shed as our options were very limited - the possibility of Frank becoming paralysed or alternatively having major back surgery where the percentage of success was pretty low.

“We honestly felt like we were in a lose-lose situation but now we are over the moon. Frank has a new lease of life and, even though we are trying to keep him calm, it is great to see him wanting to do the things he couldn’t before and enjoying life again.

“I cannot recommend NWVS enough. The care, the communication throughout and the staff were second to none. They held our hands throughout the whole process and looked after Frank like he was their own.”

George said: “The diagnosis was very upsetting. It was hard to think that, at such a young age, Lily Bet would lose control of her legs and be unable to walk.

“Before the surgery we were terrified by thoughts of losing Betty, and how her sister Daphne would cope without her, after they’d been together constantly since being born.

“Betty is now just like any other puppy, full of life and back to chasing her sister. It’s wonderful.

“We’re very grateful to Luca and all his medical staff, who were absolutely amazing. The veterinary care we received was staggering and we would very much recommend them.”