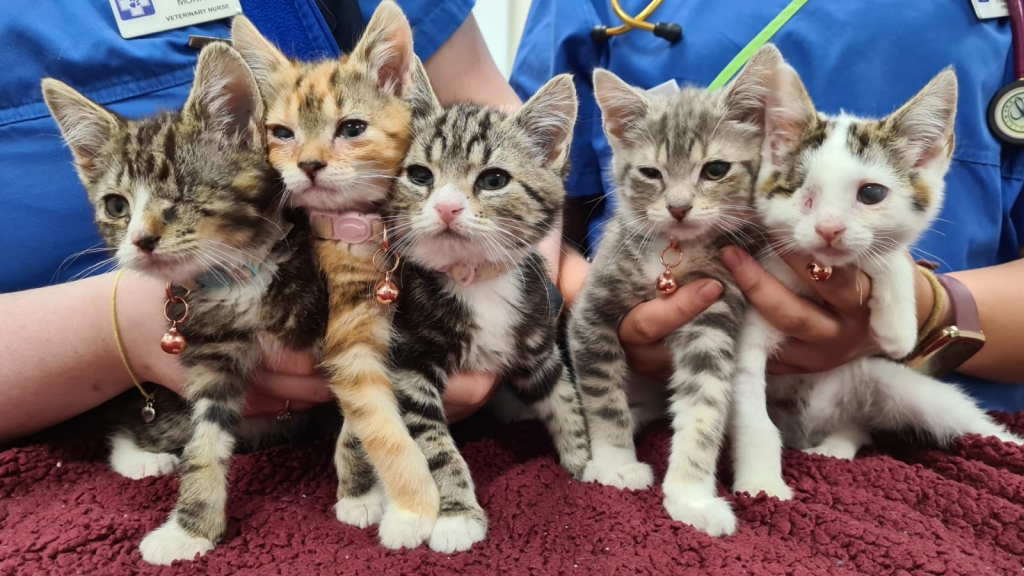 Five extremely sick and hungry kittens, who were all at death’s door, had a lucky escape after being rescued and nursed back to health by a dedicated team of veterinary nurses.

The five surviving kittens were immediately taken to White Cross Vets in Wolverhampton, which is part of IVC Evidensia, where it was discovered they had severe cat flu and were struggling to breathe, had no appetite and ulcerated eyes.

The White Cross team dubbed them the Peaky Blinders and named them Tommy, Polly, Ada, Grace and May, after leading characters in the hit TV series.

Rosie Levene-Barry, clinic director at White Cross Vets in Wolverhampton, explained: “These poor kittens were in a terrible state when they arrived with us. Our nurses immediately set about administering medication to treat the symptoms of their cat flu but it quickly became apparent that because they were so critically ill, they would need round the clock care.

“Stray Cat Rescue Team couldn’t find any available foster homes and it would be very difficult for one person to look after all five, so three of our registered veterinary nurses, Jo, Danni and Sioned, volunteered to split the group and take them home. This meant they benefitted from 24-hour critical care, which included nebulising regularly to support breathing, administering medication and bottle feeding, as they weren’t eating by themselves.

“May and Tommy were particularly ill, and we had doubts over whether they would survive the first night. Tommy had a ruptured eye and severe breathing difficulties and May was extremely weak. In addition, Ada’s eyes were both severely ulcerated and we were unsure whether we could save them. It was a heart-breaking scenario.

“Thankfully though, with the team’s hard work and commitment, over the next few days their breathing started to improve and eventually they all started eating independently and building their strength up. Once they hit 300g, we had to remove Tommy’s ruptured eye and one of Ada’s eyes, but they are all now doing brilliantly well and thriving. They have good appetites and are purring and playing like kittens should. In fact, we are so proud of our resilient Peaky Blinders that we haven’t been able to let them go!

“Polly now lives with Jo, Tommy lives with our receptionist Laura, Sioned kept May and Ada and Grace have stayed with Danni, so they can now all enjoy the lives they deserve in the loving care of our fabulous team.”

Rosie added: “Hopefully this story will demonstrate the importance of vaccinating and neutering cats, because although they’ve had a lucky escape, their suffering was avoidable.”