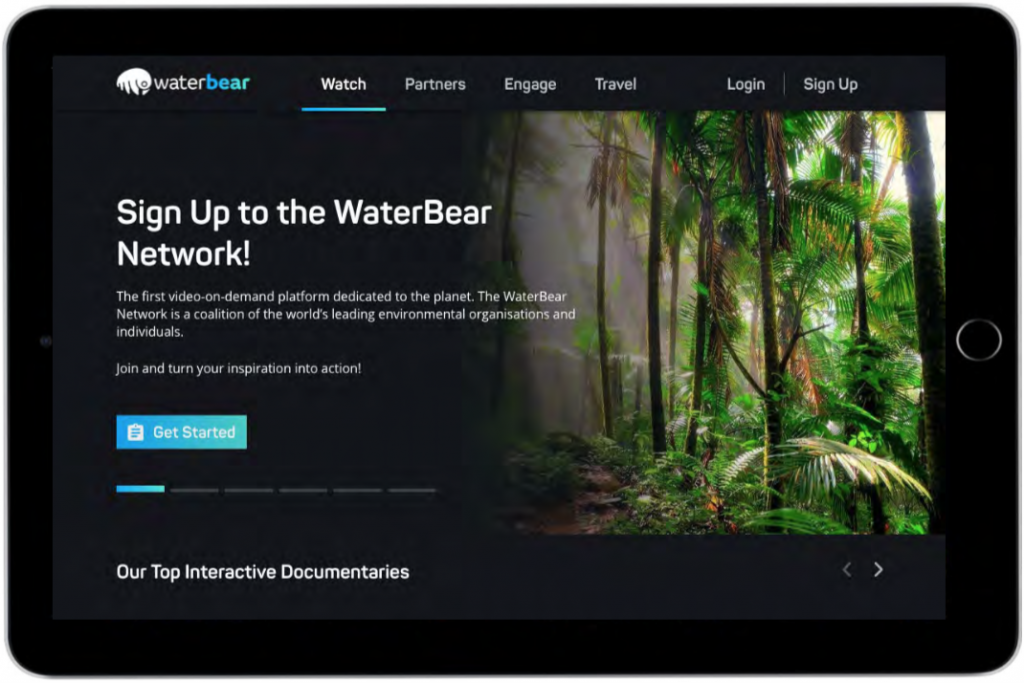 WaterBear Network, The First Interactive Video-on-demand Platform Dedicated To Our Planet, Recruits Industry Heavyweights As It Prepares For Autumn Launch

WaterBear Network, a new free interactive video-on-demand platform dedicated to supporting life on earth, has today unveiled its team of leading industry talent as it prepares for Autumn launch.

An innovative digital platform and mobile app, WaterBear will showcase award-winning documentaries, inspirational original content, live streaming - and most importantly, will facilitate awareness and action. With original and curated content inspired by the United Nations Sustainable Development Goals (SDGs), WaterBear members will be able to stream hours of video at any time, and on any device – all for free.

WaterBear’s CEO is seasoned entrepreneur, investor and founder Executive Producer and Distributor Ellen Windemuth, previously the owner and CEO of Off the Fence. Having founded the company in 1994, under her leadership Off the Fence has acquired, produced and co-produced over 6,000 hours of content.  (impact investor / founder / entrepreneur)

Joining Ellen from Off the Fence is Victor Eckard, retaining his position of Managing Director.  In his role, Victor is responsible for overseeing the strategic direction and general management of WaterBear.  Previously Victor was the Director of Strategy and Business Development for Off The Fence, formed part of the executive management team as Head of Content, that launched ShowMax for Naspers, and Director at M-Net (part of the MultiChoice Group).

Ex-General Manager of The European Nature Trust, Sam Sutaria, joins WaterBear as Head of Strategy. A life-long conservationist who has worked for over 10 years in both the non-profit and media sectors, including with the award-winning ethical creative agency Nice and Serious in London; Sam was also one of the first graduates from the joint Masters programme developed by the BBC’s Natural History Unit and University of the West of England. Sam manages WaterBear’s strategy and business development, and leads WaterBear’s collaboration with the Resilient Foundation, which works to raise funds for high impact documentaries and storytelling.

A third Off The Fence veteran is Pierre Le Gaudu,  joining the team as WaterBear’s Head of Technical Operations. A senior media operations executive with over 10 years’ experience in content operations at Off The Fence. Having witnessed many major industry changes since the beginning of his career, Pierre brings a wealth of insight and expertise.

Louis Botha joins WaterBear as Head of Finance. Relocating from South Africa where as a chartered accountant, he specialised in the media and financial services industries, leading to his involvement in the founding of Marche Media, a Cape Town-based film and television production company where he served as Chief Financial Officer for three years. He has nine years of audit - , financial consulting - and corporate financial services experience diversified across various industries including tourism, mining, medical, tech and (most recently) media.

WaterBear’s Head of Content & Production, responsible for the strategic direction, creative execution and production management of WaterBear content is Andrea Walji. Andrea previously ran her own production company Triangle Monday in London where she produced award-winning impact films including #NatureNow, Not A Pet, and Pangolins: Scale of the Trade.  Her 18 years’ of production experience spans short films, global integrated social and photography campaigns for brands including Apple, The Guardian, John Lewis, and Vogue, to name a few.

Lisa Rose joins as Head of Impact at WaterBear, responsible for all non-profit partnerships, community mobilisation around their causes and all of the impact campaigns. Lisa is a senior campaigner with over a decade of experience developing and running environmental and social justice campaigns. She brings an extensive NGO network and her expertise includes digital mobilisation, political advocacy, campaign strategy, social media and communications. Prior to WaterBear, Lisa was Patagonia’s environmental campaigns manager for Europe, and before that, she worked at Avaaz and Greenpeace International as a campaign specialist.

Head of Marketing & Publicity Poppy Mason-Watts joins the team with more than ten years’ experience as a global industry communications specialist. Poppy has held senior client-side roles at Insight TV and FOX Networks Group Asia and National Geographic, where she was responsible for corporate and consumer communications/marketing across 14 markets in Asia Pacific including Hong Kong, Singapore, Malaysia and Indonesia. Within these roles she carved a niche in SVOD/OTT consumer and digital marketing. Most recently she was EMEA Director at film and entertainment agency Way to Blue overseeing mainland Europe-based client growth.

Entertainment industry veteran Justin Steel joins the team as Head of Planning & Distribution. Building on his 20 years’ experience in Broadcast working with brands including Bloomberg News, Comedy Central, FOX and Insight TV, Justin is responsible for the overall direction and facilitation of programming, planning and distribution at WaterBear. Overseeing and maintaining the programming forward planning and scheduling operations for the WaterBear platform to create and maintain a strong programming schedule across the brand.

Lastly, Bracken Hollings joins WaterBear from Off the Fence, as Head of Partnership Content. She's responsible for creating impactful and inspiring short films with WaterBear's NGO partners. During her career as a TV producer she's worked on many popular series for the likes of National Geographic, BBC, Discovery and Channel 4. In addition to broadcast, she's produced thoughtful short-form impact content on topics ranging from climate change, sustainable living, homeless & orphaned children, AIDS, vaccinations, eco-fashion, urban communities, and learning difficulties. Her work has taken her to many far flung corners of the world, as well as on home turf in Europe.

Ellen Windemuth, CEO, WaterBear Network said: “I am excited to have such a talented team ready to go the distance together – each brings a wealth of experience, innovation and a passion for WaterBear’s mission of impact storytelling. As we prepare for launch, we are creating an inspirational showcase of purpose-focused content paired with unique technology for our global audience to interact with the causes they care about.”

WaterBear is the first network of its kind: a free interactive video and digital platform dedicated to supporting the UN Sustainable Development Goals. It does this through inspirational content, cutting-edge technology that facilitates action, and through its global network of partners. It uniquely empowers the viewer to take direct instant action to support NGOs around the world and shape a better future for our fragile planet.

To be kept updated or receive early access visit waterbear.com