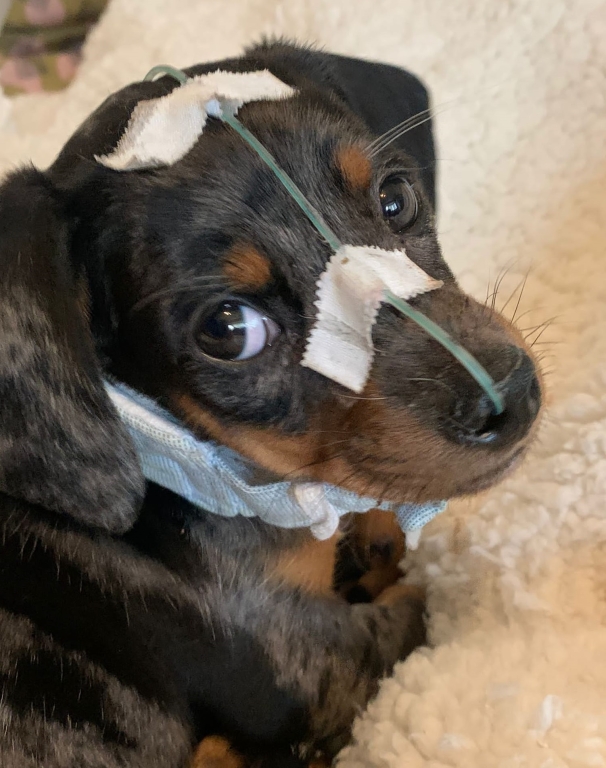 A dachshund puppy has cheated death after being viciously attacked and bitten by his own mother.

The five-week-old puppy, called Walter, suffered a badly fractured jaw and was left with his nose almost completely detached.

He was initially taken to local vets to be put down but Wolverhampton-based pet charity Wings & Paws Rescue stepped in to give him a chance to survive.

Wings and Paws CEO Clare Vowles said: “The CT scan at WMR showed the fracture was even worse than we thought.

“His whole nose at the top was detached from his jaw. There was literally nothing holding it together.

“Chris inserted two pins into his top jaw and nasal area to hold it in place, forming a scaffold to enable the soft tissue to heal.”

Vet Chris confirmed: “Walter had come to us after being bitten by his mother, suffering a fractured maxilla (upper jaw).

“The CT scan performed at WMR confirmed the fracture on the left side of the rostral hard palate (top of mouth in upper jaw) which was now highly mobile.

“We needed to operate to repair the damage and stabilise his jaw and while doing so we located several pieces of bone that were devoid of a blood supply and were therefore removed.

“Then the fracture was reduced and two converging K wires were used to pin the bone in place and hold the alignment.

“These were bent over and cut short to hold the jaw steady and allow the bone to set and heal before being removed some weeks later.

“In the meantime, a Nasogastric feeding tube, which carries food and medicine to the stomach through the nose or neck, was kept in place to minimise movement of the mouth and jaw during recovery.”

Things didn’t go entirely to plan, however, with Clare revealing that first Walter managed to dislodge the feeding tube and later one of the wires holding his jaw in place.

Fortunately, those incidents didn’t impact on his recovery, with Walter given a clean bill of health when he had a post-operative check six weeks after his surgery.

WMR vet Marcin Rogalski said: “By the time he came in for his six-week post-op check, Walter was eating normally and the jaw looked great with the maxilla appearing to be fully healed.

“All implants were removed and we also extracted two of Walter’s damaged puppy teeth that were unviable. He responded very well.”

Clare is full of praise for the WMR team, adding: “We cannot praise Chris and all the staff at West Midlands Referrals enough for their dedication and commitment to Walter. To say we are relieved is an understatement.

“We also owe a huge thank-you to our social media followers old and new who have raised funds to contribute towards Walter’s treatment. Without your support we would not have been able to save little Walter.”