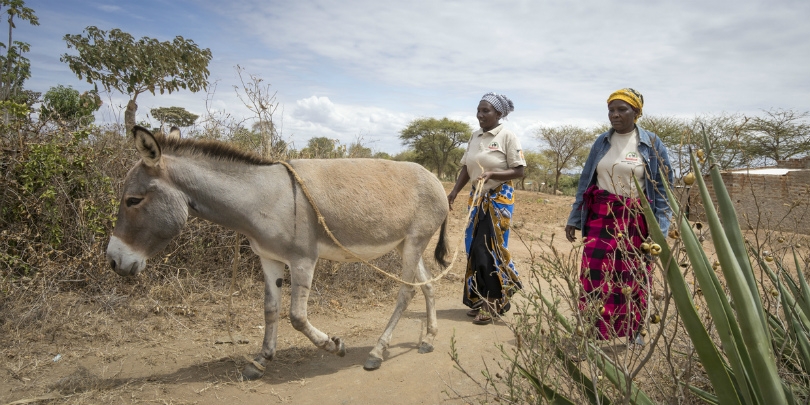 To mark World Animal Day this year (4 Oct), Brooke will be raising awareness of an issue affecting donkey numbers across the world. Following a recent prediction that donkeys in Kenya could be effectively wiped out by 2023, new research now also shows how the trade of skins is having a detrimental effect on the families in Kenya who rely on these animals to support their lives.

The new report found that even though the trade offers short term benefits to farmers the loss of a donkey makes them vulnerable to poverty in the long term. Women, children, the elderly and people with disabilities are particularly vulnerable.

Brooke works with communities to improve the lives of working horses and donkeys. The reality of the situation for the people Brooke works with in Kenya is donkey theft. Up to 60 a week are reported stolen and so working people are left desperate.

Bernard Charabu has had six of his donkeys stolen over the last few years, as the demand to fuel slaughterhouses has grown. In a day Bernard can make between 800 - 1500 ksh (£8 - £15) from selling water to his regular customers. He said:

“The money I earn from my donkeys pays for everything, my children’s school fees, food, clothing and everything else we need. When they were stolen it had a big impact. We had to depend on friends and family, it was a very hard time. It had a massive impact on all our lives. I was without a donkey for two months. We had no income.”

The new research, ‘The Emerging Trade in Donkey Hide: An Opportunity or a Threat for Communities in Kenya?’ has been published in the journal Agricultural Sciences, and was commissioned by Brooke and led by Brooklyn Economic Consulting Ltd.

Earlier this year, a report by The Kenya Agricultural and Livestock Research Organisation (KALRO) commissioned by Brooke East Africa has predicted that donkeys in Kenya could be effectively wiped out by 2023. The same report also warned that welfare in the slaughterhouses is likely to be horrifically compromised. The research found that numbers of donkeys slaughtered were five times higher than the number of stun-bullets used by the slaughterhouses, indicating that only one in five animals were humanely stunned prior to slaughter.

Since declaring the issue a crisis in Kenya, Brooke East Africa has been raising awareness of the KALRO report. They have also helped owners who have lost their donkeys set up the National Network of Donkey Owners that has brought together over 9,000 members to put pressure on the government.

The donkey skin trade is a worldwide issue, and a crisis in Kenya. Brooke is calling for a ban on the trade of donkey skins in Kenya and a crackdown on cross border smuggling of donkeys into Kenya for their skins.