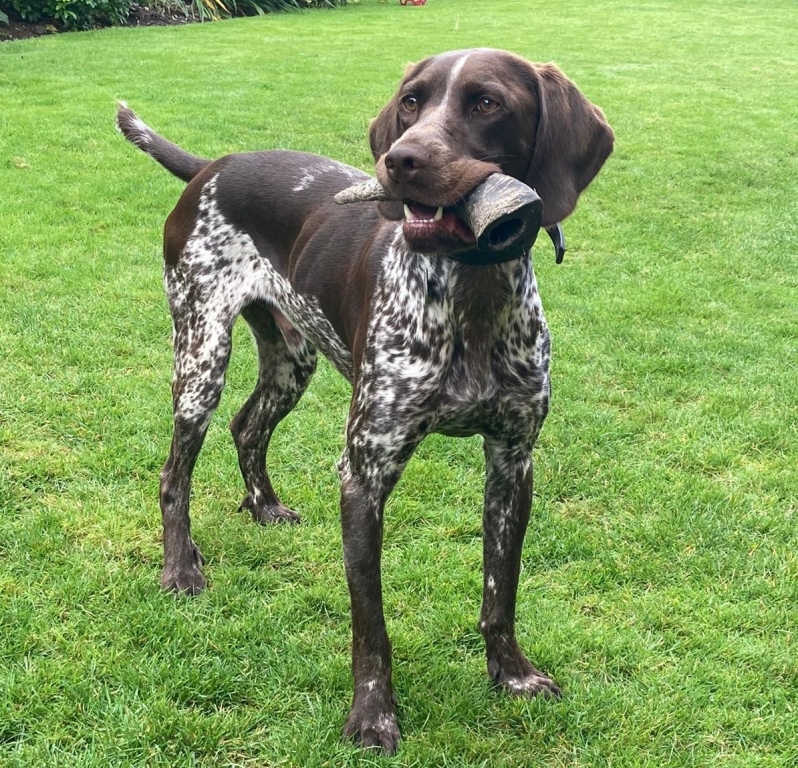 Linnaeus-owned Anderson Moores Veterinary Specialists in Winchester has been leading research into the devastating disease since 2012 and has recently launched a website dedicated to Alabama Rot, which offers advice and information, including a live map of confirmed cases across the UK.

He said: “We’re very sad to confirm two new cases of CRGV already in 2022. Unfortunately, we find ourselves at the time of year when cases are most commonly identified.

“It is understandably worrying for dog owners; however, I must stress that this disease is still very rare. We’re advising dog owners across the country to remain calm but vigilant and seek advice from their vets if their dog develops unexplained skin lesions.”

One of the dogs who sadly contracted CRGV earlier this month was Frankie, a two-year-old German shorthair pointer cross (pictured), who was treated by Anderson Moores’ fellow Linnaeus hospital, Eastcott Veterinary Referrals, in Swindon.

Frankie’s owner Kevin O’Connell, from Wokingham, said he was struck by the speed with which the disease took hold of his pet.

He said: “It was all incredibly quick. We first noticed something was wrong with Frankie on Wednesday, January 5, after he vomited.

“He then seemed to be OK but later that afternoon he was vomiting a lot, almost continuously, so we took him to our local vets who gave him some anti-nausea medication.

“However, it didn’t have any effect so we took him back to the vets the next day, where he was kept in while they carried out tests and determined Frankie had kidney problems.

“We were then referred to Eastcott Veterinary Referrals but sadly there was nothing they could do for him and he was put to sleep on the Saturday.”

Mr O’Connell said that, along with both Eastcott and Anderson Moores, he was keen to raise awareness among dog owners of the disease.

He said: “Alabama Rot wasn’t something I was aware of previously. The vets said it can affect young dogs who are in wet, muddy environments and, unfortunately, the woods behind us where we often took Frankie on walks are very wet and very muddy.”

While CRGV is often fatal, Mr Walker said the best chance of recovery probably lies with early and intensive veterinary care which may be best provided at a specialist facility.

He said: “We have been at the forefront of research into CRGV for almost a decade and have witnessed first-hand the often-devastating effects of the disease.

“Treatment largely revolves around management of the sudden onset kidney failure and, sadly, with our current understanding of the disease, is only successful in around 10 per cent of cases.”

Mr Walker added that he hoped Anderson Moores’ dedicated new CRGV website would be a useful tool for both dog owners and fellow veterinary professionals.

“In launching this new website, we aim to give both pet owners and colleagues across the industry as much information as possible about CRGV,” he said.

Referral Ophthalmic Nurse needed in Bristol up to £31k

Bristol. United Kingdom
An exciting opportunity has arisen for a Referral Ophthalmic Nurse to join a friendly and supportive team in Bristol. Referral nurse to...

Devon. United Kingdom
An experienced Registered Veterinary Nurse is required to join an independent Equine Referral hospital in Devon. The practice is in its earl...

Bath, Somerset. United Kingdom
The RoleHere at Bath Vet Referrals, we are looking for a Referral Surgeon to join our small friendly team on a part-time basis. The rol...