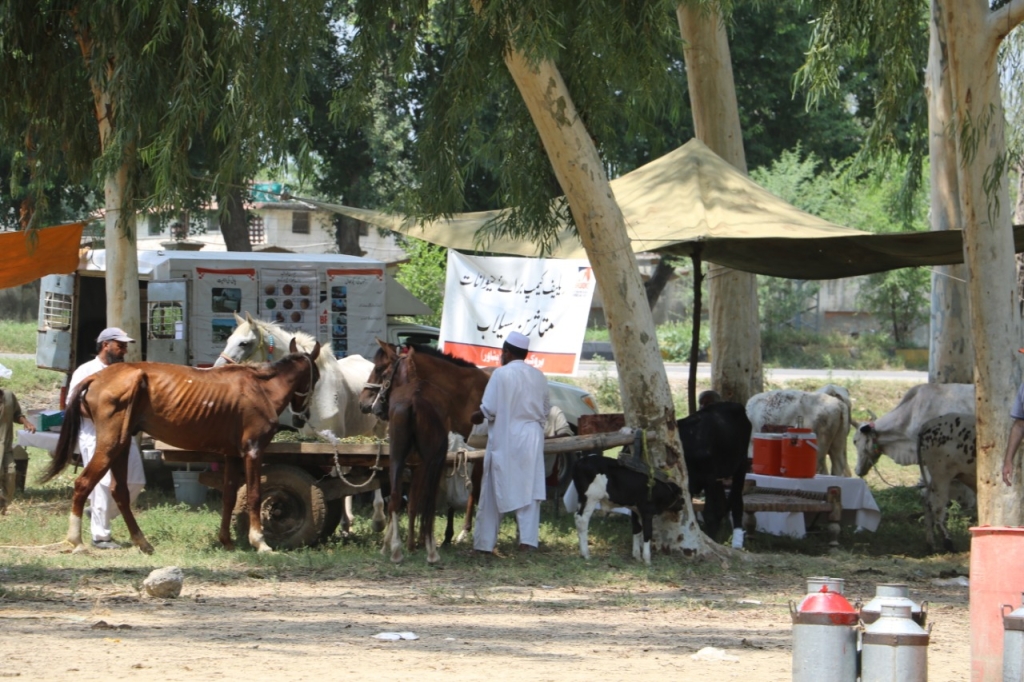 Brooke has launched an emergency appeal which aims to raise funds to help care for wounded, starving or sick horses, donkeys and mules, as well as the communities they support, following widespread flooding in Pakistan.

Over 750,000 livestock animals have already been killed in Pakistan since the crisis struck and large numbers of those that survive including horses, mules and donkeys require food and medical care.

Brooke has set up relief camps and mobile health units providing food, water, and longer-term rations for animals. The charity is also giving treatment to sick or injured animals and supporting the supply of food rations to equine owning families.

Some of the people and animals Brooke plans to support in Pakistan are employed in brick kilns, where millions of working horses and donkeys help people transport bricks via pack and cart. With almost all of these flooded, brick kiln workers will lose their sole means of making a living for a considerable amount of time.

Brooke Pakistan programme manager, Dr Javed Iqbal Gondal said, “Brooke Pakistan is keeping working horses, donkeys and mules alive during this crisis. This also has the potential to save families and communities from destitution or a lifetime of debt.”

“When the floodwaters recede there will be people in Pakistan who still have a means to provide for their families because Brooke was there to care for their animals. The team here is immensely proud of that.”

Brooke is working to provide immediate relief to 10,000 animals affected by the flooding. Around 35000-40000 equine family members should also get rations through direct and partner intervention.

The organisation is planning to support 657 communities with feed and fodder, 560 of these are in brick kilns and 97 are in other workplaces. Sindh province, south east Pakistan is one of the worst hit areas where Brooke is operating.

Brooke chief executive officer, Chris Wainwright said, “We will do everything we can for the working horses and donkeys hit by the floods and the people who depend on them.”

“The crisis in Pakistan is on a scale which demands all types of aid. Some deliver food while others bring safe water supplies. Brooke stands alongside these NGOs providing food and veterinary care for the livestock of some of the worst hit populations so those communities have a future when the floods subside and they can rebuild.”

To arrange interviews with Brooke employees in Pakistan and the UK contact email: press@thebrooke.org or call 020 7653 5885.

Brooke Action for Working Horses and Donkeys is a U.K. based, global animal health and welfare charity that gives working horses, donkeys and mules a life worth living.

Over 100 million of these animals pull carts, carry goods and work the land, earning an income that around 600 million people rely on to put food on their tables, earn a living and send their children to school. Sadly, many of them are suffering, so Brooke works with owners, communities, service providers, governments and international organisations to make long lasting welfare improvements.

Brooke was founded in 1934 when Dorothy Brooke, a British woman, sought out war horses that had been left in Cairo after the First World War. With support from an appeal letter in the Morning Post newspaper, she set up the Old War Horse Memorial, which became Brooke, and expanded across Africa, Asia, and Latin America.