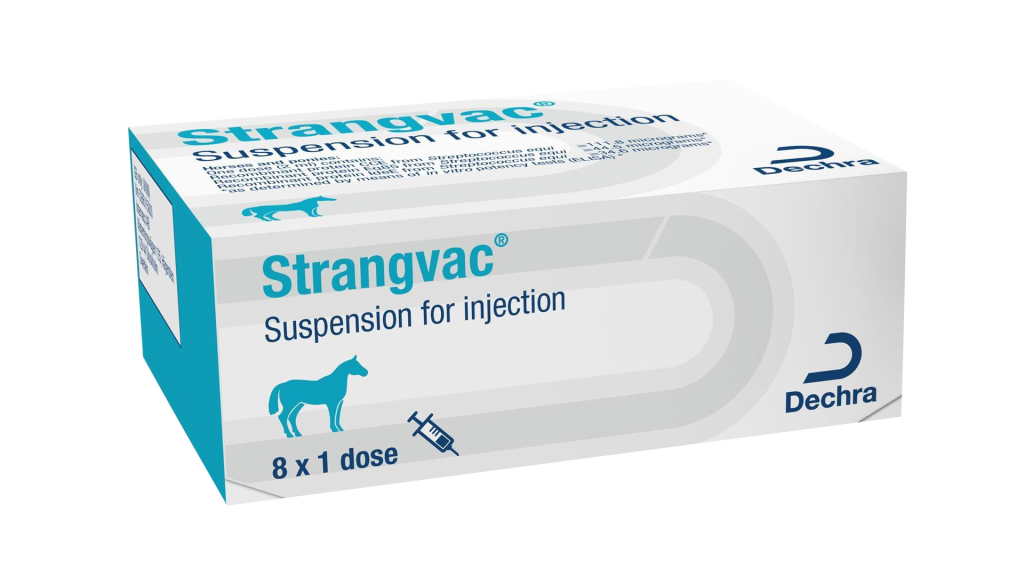 Strangvac has been in development for over 25 years and is the first and only intramuscular vaccine to help protect against strangles, which is caused by the bacterium Streptococcus equi.

Strangvac contains recombinant proteins CCE, Eq85 and IdeE from Streptococcus equi and it features DIVA (Differentiating Infected from Vaccinated Animals) capability.  The vaccine contains no live bacteria or bacterial DNA, so will not trigger positive culture or PCR tests, a key feature in outbreak management.

The vaccine, which trials demonstrate can protect more than 94 per cent of horses1, reduces the clinical signs of strangles including a high temperature, coughing, inappetence, difficulty swallowing and changes in demeanour, while also reducing the number of lymph node abscesses.  It can be given to foals from five months of age and two injections should be given at a four-week interval.  Horses at high risk of Streptococcus equi infection, such as those in livery, should be revaccinated after two months.  Based on measured antibody titres, immunological memory was found in horses following repeated vaccination six months after primary vaccination.

The innovative vaccine has received over €20million of funding and has been in development since 1995, initially at the Animal Health Trust (AHT) and more recently by Swedish company Intervacc AB.

Dr Andrew Waller, chief scientific officer at Intervacc AB, the company that developed the vaccine, comments: “Strangvac is a ground-breaking new vaccine which, alongside good stable management and biosecurity procedures, can play a really important role in improving herd immunity and reducing the number of strangles cases in the equine population, thereby preventing major economic loss to the equestrian industry.”

“Strangles is highly contagious and is one of the most common equine respiratory diseases with an estimated 600 outbreaks each year in the UK alone,” comments Sara Barker BVSc CertAVP(EM) MRCVS, equine field support manager at Dechra. “Feared by horse owners due to the potential severity of clinical signs and the infectious nature of strangles, we are sure that the new strangles vaccine will be a vital tool in disease prevention and a huge benefit to the equestrian industry as a whole.”

For further information on strangles and the Strangvac vaccine please contact your local Dechra territory sales manager or visit https://www.dechra.co.uk/equine/vaccines.