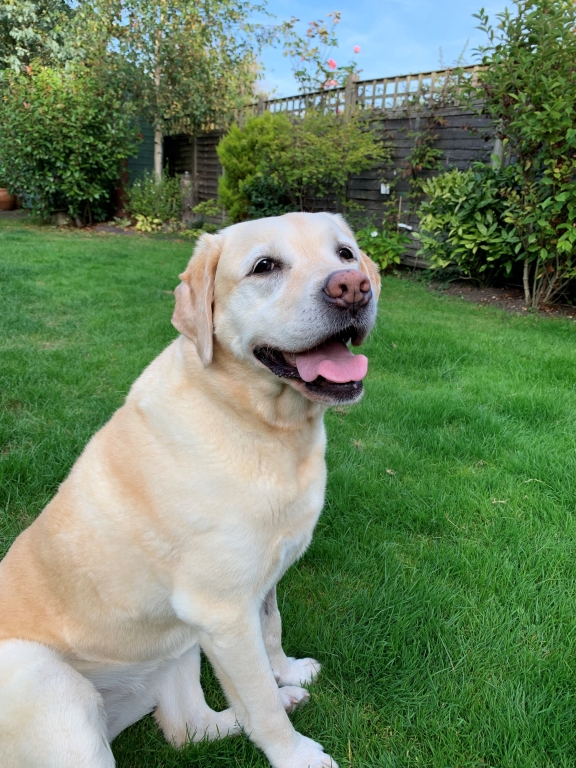 
A Surrey dog lover has described how vets battled for eight hours to save the life of her precious pet.

Ten-year-old Labrador, Harlyn, was suffering from a ruptured intestine and septic peritonitis, a life-threatening infection of the abdomen.

Owner Carolyn Cooper, from North Cheam, admitted she feared the worst when she discovered the severity of her pet’s condition but said emergency surgery at Linnaeus-owned Maven Vets in North Cheam has given Harlyn a new lease of life.

Carolyn said: “She was really suffering and in a lot of pain when she was admitted as an emergency case in the early hours of the morning.

“When the vets told us the diagnosis we were extremely concerned as it really looked like we were going to lose her.

“A cancerous tumour had burst and ruptured her intestine and this had led to a potentially fatal infection.

“We knew it was touch and go but the vets were confident they could operate successfully and save her life and we felt she deserved to be given the chance.”

Dr Bacon explained: “We performed an exploratory laparotomy, which is major abdominal surgery and requires the support of multiple team members.

“After inspecting Harlyn's entire abdomen, the source of the leak was found to be a small 1-2cm tumour, affecting the wall of her small intestine, which had burst.

“Intricate surgery, called an enterectomy, was needed to remove more than 15cm of the affected small intestine, with an end-to-end anastomosis used to reconnect the intestines.

“The discovery of the tumour meant larger surgical margins were needed to try to remove any remaining cancerous cells in her intestine.

“More than seven litres of sterile fluid was then used to wash out all the bacteria and intestinal content from her abdomen to prevent a recurrence of her septic peritonitis.

“Thankfully, her surgical wound showed no evidence of breakdown, which is a risk with any intestinal surgery, and once she’d started eating by herself again, she was allowed home.”

Subsequent tests on Harlyn’s tumour identified it as a rare Intestinal T-Cell Lymphoma so she’s now been prescribed tablets to try and kill or stop any further tumour cells spreading or causing disease.

Owner Carolyn is grateful Harlyn has been given a second chance and has praised the excellent care received at Linnaeus-owned Maven Vets.

She added: “We have been with Maven Vets for 10 years and we’re so thankful for the way they have cared for Harlyn.

“It was all such a shock for us but they kept us fully informed throughout, even calling us during the operation to keep us updated on their progress.

“We’re so glad we took the risk of such extensive surgery in the hope of saving Harlyn’s life.

“Dr Bacon said he was confident and he was right. She’s home again and happily wagging her tail so we’re absolutely delighted.”

For more information on Maven Vets, including its 24/7 emergency care service, visit www.mavenvets.co.uk.