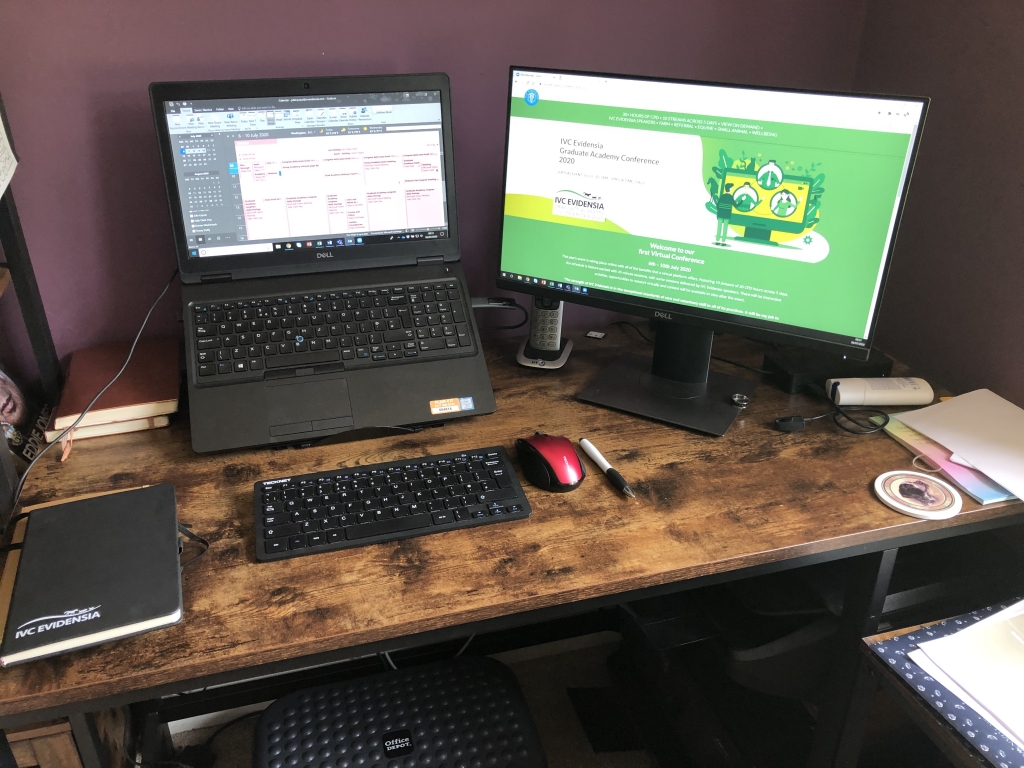 IVC Evidensia have just held their 2nd Graduate Academy Conference, an opportunity for the graduates to stream lectures on a wide range of subjects while engaging with their peers.

Last year, the inaugural conference was held in the grounds of Warwick University but, in these interesting times of social distancing, a face-to-face conference wasn’t possible. The IVC Evidensia Graduate Academy team wasn’t going to let anything stand in their way and so, took the conference online.

“We were very excited when we were planning the Graduate Academy Virtual Conference. We knew we couldn’t bring everyone together as we did last year but we wanted to make sure our graduates had a useful and interesting conference that would really help them in practice,

“The emphasis was on the fact that the lectures were live and interactive but, as we know, life in practice is tough at the moment, and we didn’t want to add to that burden. That’s why the lectures were scheduled for the afternoon so our graduates could work in practice in the morning and then pick the lectures to attend in the afternoons. Flexibility was the key and of course all of the talks will be available on demand for the next 6 months for everyone within IVC Evidensia, not just the graduates.”

There have been few rays of sunshine that have managed to sneak out from behind the grey cloud that is COVID-19 but, for the academy team, going virtual seems to be one of them with the support of The Webinar Vet.

Being accessible on laptop, desktop, mobile and tablet meant that graduates from across the whole group, including mainland Europe, could attend without leaving home. Juliet Pope, Group Graduate Manager said,

"The vets within the graduate academy have had their path through our programme interrupted in ways that no one could have predicted a few months ago. Consequently the Graduate Academy team were very happy rather than having simply to cancel the event as so many other conferences have been cancelled, to instead be able to present the annual Graduate Academy conference as a virtual event. As Group Graduate Academy Manager I was particularly pleased that offering the conference this way enabled so many more of our graduates from Mainland Europe to join and benefit from the huge variety of content than would typically be possible for a face to face event."

The conference offered over 30 hours of CPD in two simultaneous streams over the five days. Lecture subjects included pet nutrition, referrals, cardiology, soft skills and well-being as well as lectures aimed at equine and farm vets.

Mark O’Byrne, Group Head of Nutrition chaired the lecture on nutrition. He said,

“For the first time, Nutrition featured as a standalone stream and we took this opportunity to showcase some cutting-edge innovation from one of our nutrition partners, Purina. They supported the day with their key opinion leaders from The Purina Institute in the US and their R+D centre in France, covering three hot topics – Probiotics and the Microbiome; Cognitive Dysfunction and Canine Epilepsy and Feline Allergy – management of human allergies to cats with a new feline diet. All speakers generated a lively Q+A session and I was absolutely thrilled that so many of our young graduates joined us in the nutrition sessions for the day."

Delegates were encouraged to interact with the lecturers after each lecture with Q & A sessions. Amanda Boag, Group Referrals Director chaired a session on career pivot points and career progression. She said,

"What a resounding success! The virtual format worked incredibly well with great interaction between the participants and speakers – lots of really insightful questions. The lecture sessions themselves and the answers to any questions were useful and practical. I particularly enjoyed chairing the session on career pivot points. It was inspiring to hear about the career progression of some of our clinicians and the variety of factors that influenced them."

Nearly 400 delegates attended the virtual conference using an app to check the schedule, book their preferred lectures and interact in the ‘Community’ section with their fellow delegates for those ‘water-cooler moments’ that they would normally experience at a face-to-face conference. They could even ‘visit’ the stands of IVC Evidensia’s partners for the conference, Bayer, Boehringer Ingelheim, CEVA UK, Dechra Pharmaceuticals PLC, IDEXX, MSD, Nestlé Purina PetCare Europe, Middle East & North Africa and Vetoquinol Global.

In comparison to last year’s attendance (250), organisers were very happy with the numbers of atendees for this year. And the delegates enjoyed the conference too, even without the face-to-face aspect. Lara Manzano of Myerscough Veterinary Group really liked the app in particular. She said,

“I found the app was really well organised and easy to use. I liked that I could message a lecturer directly to ask questions. A point that is typical of IVC Evidensia conferences is that they try to encourage people to socialise. I was expecting to have less interaction but thought being able to create a profile and chat to your colleagues in the app were a bonus.”

“Both lecturers were amazing and the content was not only really useful, but it was really entertaining to watch.”

“I learnt a lot in different fields with incredible teachers.”

“I missed the 'in-person' social interaction with both peers and lecturers, but given the COVID situation, I think the option of a virtual conference was the best possible choice, enabling us to gain new information and do some networking while still prioritising the safety of everyone involved. I will always be more nostalgic for the in-person meetings.”

Tiffany Stein from Beech House Vets liked the idea that she will be able to watch some of the lectures in the near future. She said,

“I really enjoyed the lectures of the conference I was able to view live and I look forward to being able to access all the rest of them at a later date to catch up on all the stuff I missed.”

So, all in all, it seems virtual conferences can deliver and bridge the gap that we are faced with in the current circumstances. Is this the future? Maybe a mix of the two, but there will never be a substitute for interaction in real life.