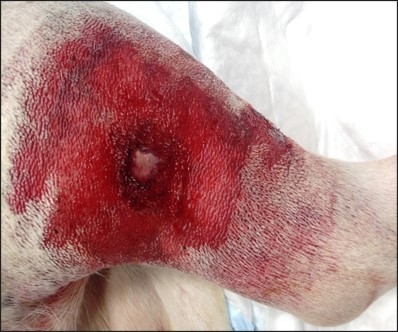 A leading veterinary referral centre has confirmed nine new cases of the potentially fatal cutaneous and renal glomerular vasculopathy (CRGV), taking the tally since January 1 to more than 25 per cent of the total 2020 number.

Anderson Moores Veterinary Specialists in Winchester, which has been leading research into this devastating disease since 2012, has confirmed the new cases and is also awaiting a further seven test results.

The latest cases take this year’s total number to 12. Linnaeus-owned Anderson Moores collates information on all cases and reports across the country, with 263 confirmed since the disease was first detected in the UK in 2012.

CRGV, which originally appeared in the late 1980s, affects the kidneys and has a 90 per cent mortality rate.

David Walker, American, RCVS and EBVS European specialist in small animal internal medicine, leads the team at Anderson Moores Vet Specialists and is the UK’s foremost authority on the disease.

He said: “We’re very sad to confirm 12 new cases of CRGV already in 2021. We are also awaiting results of a further seven possible cases. Unfortunately, we find ourselves at the time of year when cases are most commonly identified.

“It is understandably a worrying time of year for dog owners with regard to CRGV; however, the disease remains rare.

“The disease seems to appear across many counties at this time of year. January and February are typically our highest case number months and this year is sadly no different.”

Previous cases have been identified across the country including areas such as Gloucestershire, Surrey, Derbyshire, Yorkshire, Lancashire, Cornwall, Devon and Staffordshire.

Mr Walker added: “Treatment primarily revolves around intensive management of the acute kidney injury and is sadly only successful in around 10 per cent of cases. Vets should feel free to contact the team at Anderson Moores to discuss any suspected cases of CRGV.

To find out more about CRGV, please visit www.andersonmoores.com and the Alabama Rot Research Fund at www.arrf.co.uk.