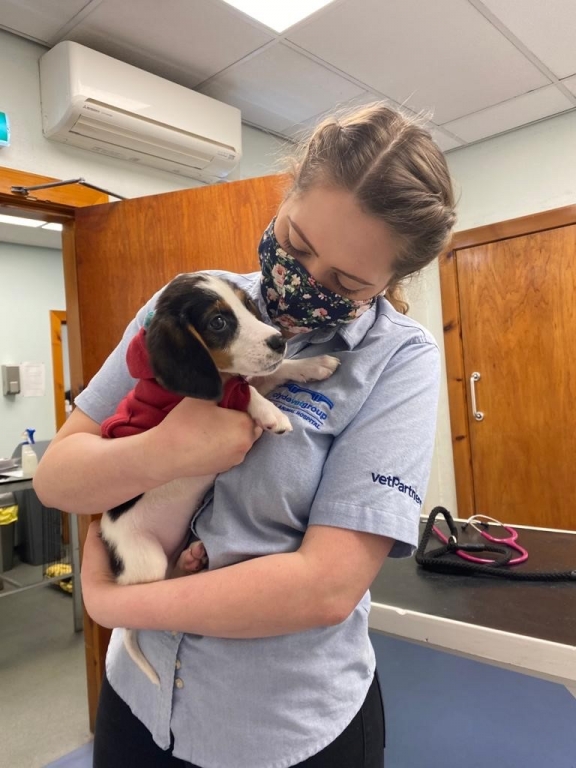 A LANARKSHIRE veterinary hospital that helped bring a tiny puppy back from the brink of death is urging pet owners to have their dogs vaccinated against parvovirus.

Reggie, a Jack Russell-cross-Beagle was just six weeks old when he was rushed to Clyde Veterinary Hospital in Lanark suffering from the deadly illness.

He was so poorly vets feared he might not survive, but thanks to the high level of care he received at the hospital, Reggie has made an incredible recovery.

Now Clyde Veterinary Hospital is calling for owners to have their dogs vaccinated against parvovirus, to prevent another much-loved pet suffering like Reggie.

Young puppies and unvaccinated dogs, including those who are not up to date with their booster jabs, are most at risk of parvovirus. Signs of the disease include foul-smelling diarrhoea that contains blood, vomiting, loss of appetite, collapse, depression, fever and sudden death.

Clyde Veterinary Hospital vet Fabienne Giraud and the team worked round the clock to care for Reggie, and she said the pup is lucky his owners, Reece Dodds and Gillian Deeney from Wishaw, got him to hospital quickly.

Fabienne said: “Sadly, there are no drugs to treat parvovirus, so to make sure Reggie had the best chance of survival we gave him round-the-clock supportive care.

“He was hand-fed every hour using a syringe and given fluids intravenously because he was dangerously dehydrated due to the vomiting and diarrhoea. Parvovirus damages the dog’s digestive system, so Reggie needed antibiotics to reduce the risk of suffering from blood poisoning.”

Reggie also had to be kept in isolation at the hospital because parvovirus is highly contagious, and the vets and nurses caring for him followed strict hygiene procedures. Luckily, the treatment he received was successful and, after eight days in hospital, he was able to go home where he continued to improve under the care of his owners.

He has since been given a clean bill of health and has had a course of three injections at Clyde Vets’ surgery in Wishaw to protect him against parvovirus in the future.

Fabienne added: “It was so rewarding when Reggie pulled through as the odds had really been against him. When he came into the practice for his second vaccine I just had to have a cuddle – I couldn’t believe how much he’d grown!”

Mr Dodds said thanks to the efforts of Clyde Veterinary Hospital, Reggie is now alert, inquisitive and full of energy – just like any healthy pup should be.

He said: “I can’t thank Fabienne and the other vets and nurses enough for saving Reggie. The level of care they gave him was outstanding, and to go from being barely alive to how he is now is incredible.

“We bought Reggie after seeing an advert on the internet and were told he was eight weeks old. We now think he was only six weeks old and not even weaned from his mum. He was tiny and very quiet, but we didn’t realise he was poorly until we got him home. It wasn’t the exciting, joyful experience we’d hoped that getting a puppy would be, but we have formed a strong bond with Reggie and can’t imagine being without him.”

Clyde Veterinary Hospital advises anyone thinking of getting a dog to go to a reputable breeder or rescue centre and make sure a puppy has had its first parvovirus vaccination before taking them home. Check their vaccination card looks legitimate, has vaccination stickers and a vet’s signature and is not a photocopy.

Fabienne added: “Every owner should have their pet vaccinated. Parvovirus is so contagious that a dog can catch it just by going for a walk in the park or sniffing another dog’s faeces, and it can be easily spread on shoes and clothing. If you think your pet is showing signs of the disease, you should contact your vet immediately.”