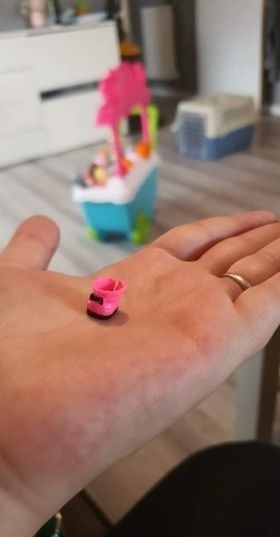 The tiny toy doll’s shoe which was swallowed by Daisy the cat, causing a dangerous internal blockage which required surgery at Eastcott Vets

The tabby and white cat, called Daisy, needed emergency treatment at Linnaeus-owned Eastcott Veterinary Referrals, in Swindon, to remove the shoe, which had caused a dangerous internal blockage.

Daisy’s relieved owner Emily Roma Docwra, from Swindon, was left in no doubt it was the expertise of Eastcott veterinary surgeon Gemma Longsdon that saved the day for Daisy.

Emily, who was nine months pregnant at the time of Daisy’s drama, saw her beloved cat swallow the toy – which was part of a popular toy doll – and was able to act quickly to get in touch with the vets.

She said: “I’m absolutely amazed at the level of care Daisy received after having swallowed a very small toy which caused an almost fatal intestinal blockage.

“All the staff involved in her care, from the receptionists to the vet Gemma, were absolutely outstanding.

“I was a worried, nine-month pregnant mum, with a four-year-old child as well as my cat, and the level of care for, not only my pet but updates to myself, were simply priceless and extremely appreciated.

“I’m eternally grateful to the practice, the care was second-to-none and just amazing. I couldn’t be any more thankful to them for saving my Daisy’s life.

“I’d like to say a huge ‘thank-you’ to all involved in her care from Daisy, myself, my partner and our little girl Bella, who now has her beloved best friend and companion back.”

Vet Gemma said: “Daisy was very lethargic when she arrived at Eastcott. She was off her food and vomiting but she had not defecated for three days.

“We performed an enterotomy (a surgical incision into the intestine) and identified a foreign body in the small intestine.

“We made an incision into the small intestine and extracted it, which was when we discovered the doll’s plastic shoe.”

Daisy was put on pain killers and intravenous fluids overnight before being allowed home under strict orders for her movement to be limited for 14 days. She has now made a full recovery.