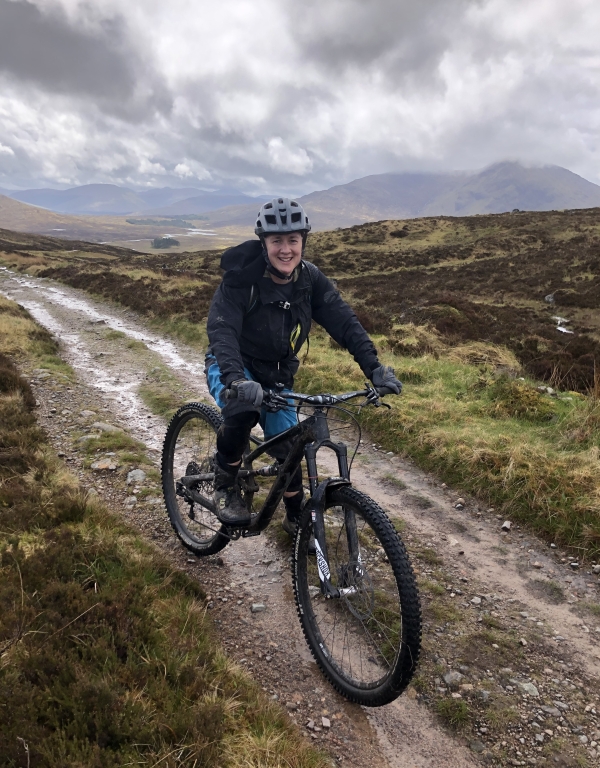 Catharine Gale, who is a clinical director at Linnaeus-owned Hawick Veterinary Practice

A leading Hawick vet has used pedal power to raise hundreds of pounds for good causes.

Catharine Gale, who is a clinical director at Linnaeus-owned Hawick Veterinary Practice, jumped in the saddle for her fundraising mission to tackle the 96-mile West Highland Way.

Raising money for the veterinary industry charity, Vetlife, and the Rowan Boland Memorial Trust, which helps young sportspeople in the Borders, Catharine braved the elements to complete her epic ride in three days.

So far, Catharine has raised a fantastic £690, exceeding her initial £500 target for the two charities.

Catharine said: “Having grown up near to it, and many times travelled close to it, I have long held the ambition to take the slow road and cycle the 96-mile West Highland Way.

“This year, I decided to commit to it and took on the ride to give something back to both the Rowan Boland Memorial Trust, which has helped our family in the past, and to the charity Vetlife, which offers support to those in my profession.

“As anyone who has walked the West Highland Way will testify, the route is a quite a challenge, especially a 10-mile section along the edge of Loch Lomond where I had to carry my 14kg bike.

“The weather was very wet for much of the first day and I was glad I had arranged good places to stay along the way. I did not meet any other bikers on the whole route but plenty of walkers were keen to borrow my bike for the downhill sections!

“The high point was the top of the Devil’s Staircase in magnificent Glencoe and then in the last section seeing Ben Nevis appear was a relief.

“My husband Andy was in Fort William to meet me on the Wednesday evening and I was delighted to complete the route as planned.”

The sporting vet completed her epic ride in time to cheer on eldest daughter Phoebe, who was competing at the UCI Mountain Bike Downhill World Cup at Fort William.

Professional rider Phoebe, 17, finished second in the junior women section, which was the fifth meeting in a series of 11 events held across the world including Brazil, USA, Austria and Switzerland.

Catharine said: “Phoebe actually played a part in my challenge, as on the second day I had overestimated how many miles I would be able to do, so a hotel kindly allowed me to lock up my bike with them. Phoebe was on her way to Fort William for the meeting, so was able to pick me up and give me a lift to my accommodation.

“It was the first time I had seen her for weeks as she had been away competing but it had been pouring with rain and I was soaked through, so I couldn’t even give her a hug!

“It was great to be able to complete my ride in time to watch Phoebe compete though. It was the first time I had been to one of her World Cup races, so it was great to meet her team FMD Racing and sponsors Fox Racing, and see them in impressive action for the rest of the week.”

Catharine qualified from Cambridge in 1996 and joined Hawick Veterinary Practice in 2010. She grew up in Perthshire and worked in New Zealand before returning to the UK to join the team at Hawick.

There is still time to donate to Catharine’s JustGiving page. For more information, visit https://www.justgiving.com/team/CatharineWHW2022. To follow Phoebe’s mountain bike career, search for @_phoebegale on Instagram.