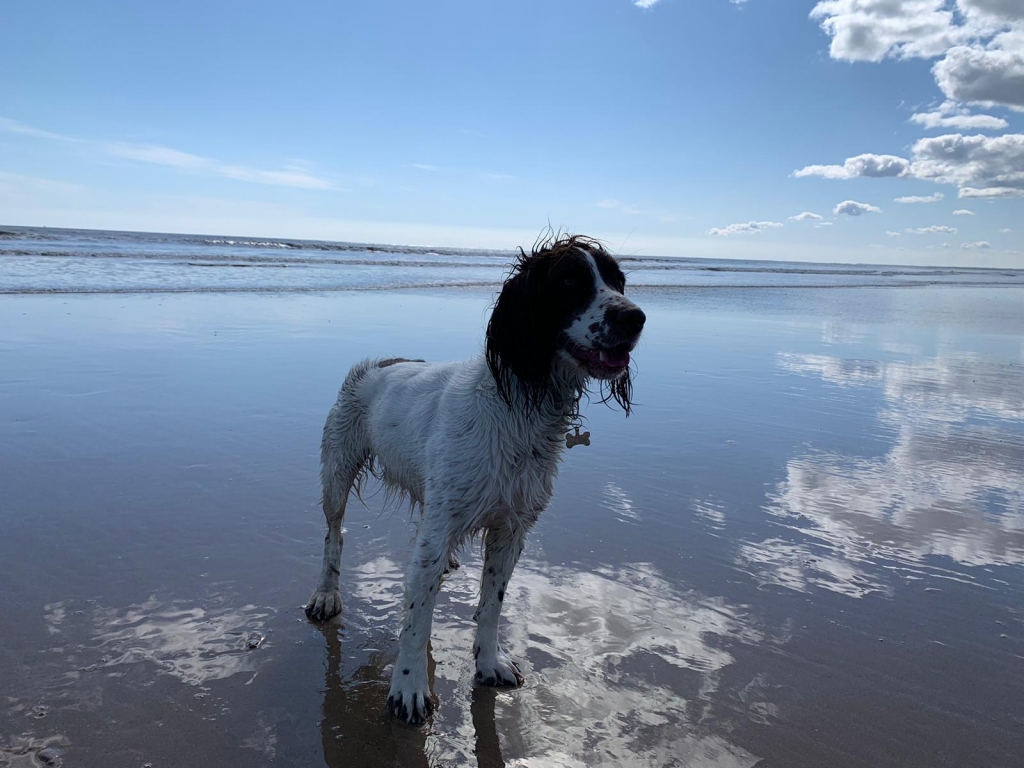 A seriously injured dog had to be rescued from the Peak District hills after suffering a gaping gash to his chest while out running with his owner.

The three-year-old Sprocker Spaniel, called Alby, was unable to move after suffering the traumatic injury and needed to be carried down the rolling hillsides before being rushed to vets in Sheffield.

However, Alby’s wound was so deep and serious he was swiftly referred for specialist treatment at the renowned Linnaeus-owned Willows Veterinary Centre and Referral Service, in the West Midlands.

Alby has now made a remarkable recovery and grateful owner, James Biggin, from Sheffield, is full of praise for soft tissue specialist Will Robinson and the Willows’ team for their expert care during what was a distressing time.

James explained: “My wife Rachel was out running with Alby in the Peaks along some familiar routes and he really does bound over the heather and does a lot of jumping around off the paths.

“On this particular day, Rachel saw him jump over a rock and then heard him make an awful noise, having landed on something sharp.

“Rachel wasn't sure what had caused the injury but she did look over to where she thinks it happened and thought she saw a stick stuck in between the rocks.

“The result was Alby had punctured his chest quite badly, suffering a cut that was more than two inches long.

“He wouldn't move and was in quite some distress. Rachel was unable to move him as he is quite heavy, so she called me at work.

“I raced out to where they were and carried him off the hills before taking him straight to our local vets who were ready to admit him.”

“Initially our local vet didn't seem overly concerned and felt Alby had been lucky, however, within two hours they had contacted us again to say they felt the injury was serious enough to need specialist attention.”

Will then spoke to the referring vets before Alby and his owners undertook the long journey and, despite initial impressions, it was quite clear he had sustained a significant injury.

James said: “Our vets booked us with Willows and we immediately set off from Sheffield, even though Alby had just been under general anaesthetic, so was not in great condition.

“To be sent such a distance did concern us, as this was obviously a serious injury in the eyes of the vets.

“When we arrived, we sat down with Will, the specialist surgeon, who explained everything brilliantly. He talked us through the process and was very honest with us.

“It was an upsetting discussion, of course, as things had escalated very quickly during the day. We took his advice on board and agreed to let the team take Alby for immediate open chest surgery.

Will, an RCVS and European specialist in small animal surgery, said: “Alby was admitted as an emergency case. His referring vets did a great job to make sure he was as stable as possible prior to travelling, as it was felt he needed a specialist level of care that could only be provided at a referral centre such as Willows.

“He was struggling with his breathing and a pneumothorax was discovered which required drainage.

“We took him to surgery to explore his chest cavity to see if any foreign material was present and to find out if there was any significant damage to the organs in his chest causing the continued air leakage.

“Alby was anaesthetised by our specialist anaesthesia team and taken to theatre where an approach was made through his sternum.

“A wound could be found between two of the ribs but, luckily for Alby, no significant damage to the organs or foreign material was discovered. The wound was closed and Alby was moved to recover in our dedicated intensive care unit for the following 36 hours.

“Alby was then allowed home under strict instructions to rest to allow his sternum to heal and the good news is that he is recovering really well and has shown no adverse effects from the initial injury.”

No-one is happier than Rachel, who said: “The Willows team were simply brilliant. It was obvious how dazed and upset we were but they handled that side of things so well and sensitively.

“We also had to leave Alby behind and head back to Sheffield but Will reassured us before we left and called us every morning with an update, which really helped as we were not left wondering each day.

“That’s why I would really recommend Willows to any other pet owners. As unpleasant situations go, this one could not have been handled better!”

To find out more about Willows’ wide range of specialist services, visit www.willows.uk.net or search for Willows Veterinary Centre and Referral Service on Facebook.

Lymm, Cheshire. United Kingdom
An exciting opportunity has arisen for a Small Animal Vet to join the team at Lymm Veterinary Surgery. This is an excellent time to joi...

Warrington, Cheshire. United Kingdom
We have an opportunity for a Small Animal Veterinary Surgeon to join the team at our Beech House Practice in Warrington. It is an exciting t...

Wilmslow, Cheshire. United Kingdom
We are recruiting for a Registered Veterinary Nurse to work at our lovely Broom Cottage practice in Wilmslow.Applicants must be fully qualif...

Warrington, Cheshire. United Kingdom
We have an opportunity for two Small Animal Veterinary Surgeons to join the team at our Beech House Practice in Warrington. Ideall...