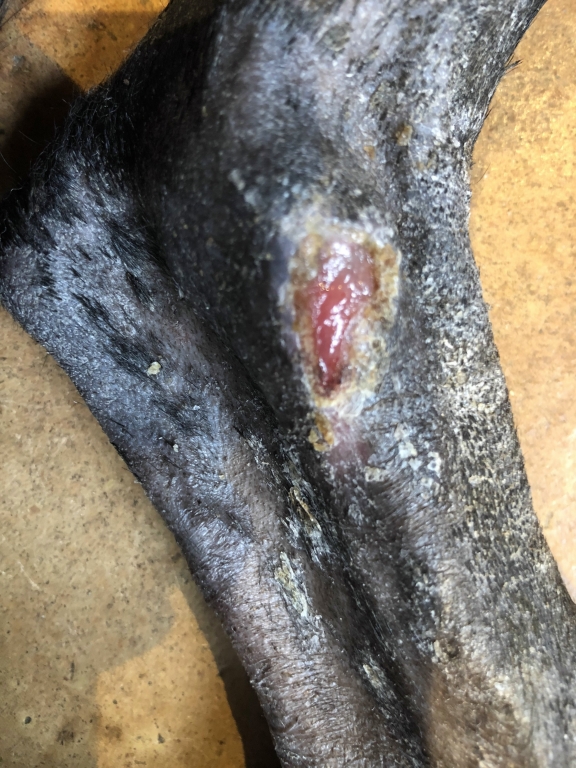 One of the UK’s most respected veterinary referral centres has successfully treated a case of suspected cutaneous and renal glomerular vasculopathy (CRGV), more commonly known as Alabama Rot.

However, clinicians at Anderson Moores in Winchester, have enjoyed success in a case of a Labrador Retriever called Molly, who was referred to their internal medicine team just before Christmas due to limb swelling and a deep and painful ulcer on one of her legs.

Blood tests carried out by Anderson Moores, which serves the Hampshire, Dorset, Surrey, Wiltshire, Berkshire and West Sussex areas and recently joined Linnaeus, indicated Molly’s kidneys were not functioning normally, which, along with a low platelet count, increased liver values and blood smear changes, further supported the suspicion of CRGV.

David Walker, American, RCVS and EBVS European specialist in small animal internal medicine, leads the team at Anderson Moores Vet Specialists and is the UK’s foremost authority on the disease.

He said: “CRGV is unfortunately fatal in most dogs whose kidneys become affected. Although heartbroken to hear the news, Molly’s owners were keen to do everything possible for her.

“A urinary catheter was placed to help us balance Molly’s fluid input to her output and ensure her kidneys were continuing to produce urine.

“Molly also received other medications to help counteract some of the other effects of CRGV and acute kidney injury on the body, while her skin lesions were appropriately managed and dressed, with our soft tissue surgeons routinely monitoring the progress of these.

“Molly’s urine production and blood work initially seemed to be following an all-too-familiar pattern of deterioration, making us fear the worst.

“However, after four days’ treatment, things started to improve, and we began to cautiously hope she would survive the disease. She continued to slowly improve, and, after two nerve-wracking weeks, Molly was discharged to continue her recovery at home.

“Recovery for patients such as Molly is often prolonged, but she has continued to do well.

“Molly’s journey is heart-warming, especially during these difficult times, and has brought immense joy to not just her family but also the whole team at Anderson Moores, especially those involved in her care.

“Sadly, stories such as Molly’s are relatively rare, with CRGV remaining a devastating disease, without a known cause or treatment, and which has taken away many beloved dogs from their families.”

To find out more about CRGV, please visit www.andersonmoores.com and the Alabama Rot Research Fund at www.arrf.co.uk.