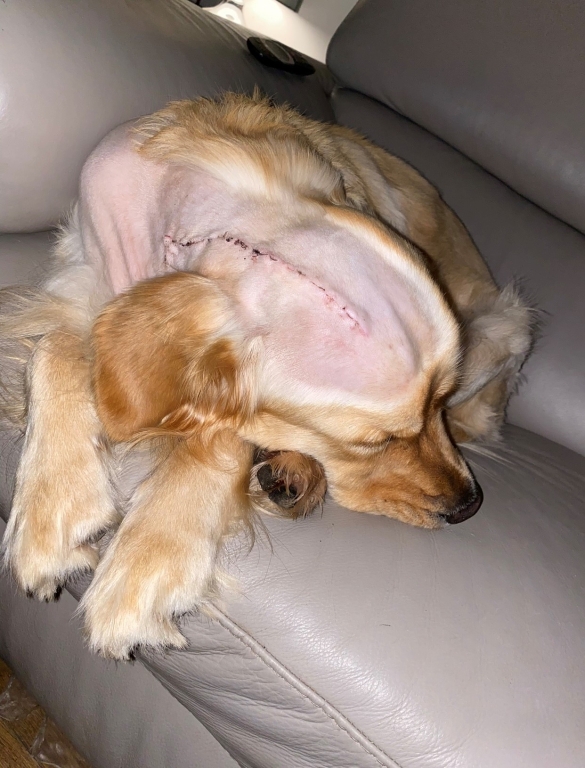 Family's Joy After VSS Carries Out Life-changing Surgery On Puppy

A dog lover has spoken of the emotional roller coaster she and her family endured when their precious pet lost his eyesight.

Sarah Millar, from Carlisle, took on golden retriever Gus when he was just a puppy knowing that his vision was impaired but, when he was nine months old, he suddenly became totally blind.

Ophthalmologists examined Gus and reported that his eyes were perfect so referred him to Veterinary Specialists Scotland (VSS), in Livingston, where Alexandra Ferreira, a clinical fellow in neurology and neurosurgery, took charge of the case.

Sarah said: “Gus had MRI and CT scans and Alexandra was amazed. She said he had the biggest case of hydrocephalus (fluid on the brain) that she’d ever seen and it was swamping both sides of his brain.

“I was shocked and couldn’t imagine the pain he was in but Alex said the result wasn’t the worst outcome as there was a way to drain the fluid and ease the pressure on Gus’s eyes and brain.”

That was the start of a three-month battle to improve the young pup’s quality of life, however, Sarah admitted there were times when she feared she would lose him.

Sarah explained: “Gus needed to have a shunt fit to drain the fluid from his brain into his stomach but there were a series of setbacks along the way.

“First, he reacted badly to the anaesthetic, then he needed to have a second shunt fitted with a controller to govern the flow.

“There were lots of tears along the way and it was a real rollercoaster of emotions. There were many times when we were worried to answer the phone in case it was bad news, the worst news.

“Instead, one morning we got the call to say that Gus had come off his sedation and had even been for a little walk outside.

“Not long afterwards, Alex said he could come home because she felt he would thrive even more with his family around him.

“It was a wonderful moment. Gus is actually my daughter Mia’s dog and he came home in time for her 16th birthday. She says it was her best birthday present ever!

“It was a real happy ending. He’s a fabulous dog, a one of a kind and we owe Alex and VSS everything. She put her heart and soul into saving his life and we couldn’t be more grateful.”

VSS, which is owned by Linnaeus, is one of the UK’s leading veterinary referral centres and clinician Alexandra said it was a challenging case throughout.

She explained: “A medium pressure shunt was placed and Gus initially showed very good signs of recovery but a few weeks later some neurological signs returned.

“Gus was in pain and obtunded and spent most of his day sleeping. I was concerned about over-shunting, infection or less likely, migration of the shunt.

“A further CT scan confirmed overshunting with external hydrocephalus. I was quite worried about the possibility of subdural bleeding.

“This proved difficult to manage as we don’t have an accurate way to measure the intracranial pressure in dogs and surgery had to be repeated using a high-pressure shunt to improve control.

“When I placed this second shunt, I did not want to prep and drill the other side of the skull, as I was afraid of infections and further trauma, so I decided to go on the same side but reposition the shunt.

“Gus is far more responsive and interactive at home and I am delighted for him and for Sarah and the family.”