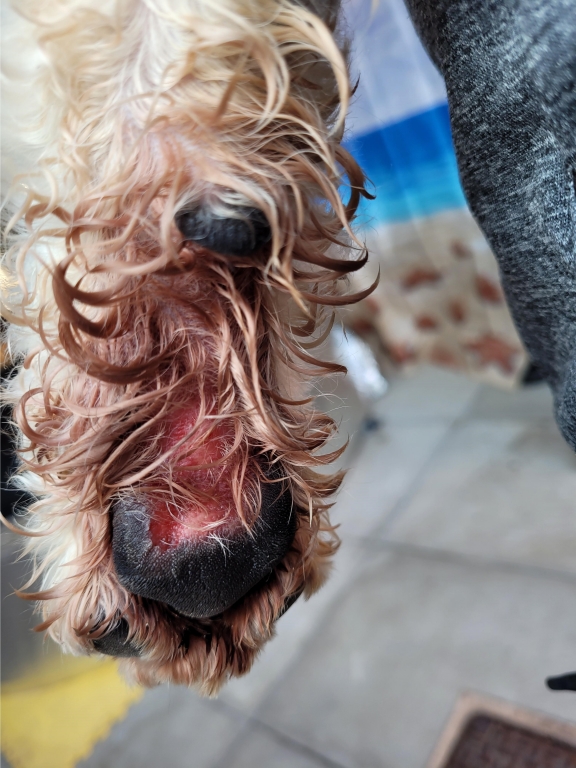 A devastated dog lover has shared the heart-breaking story of her young Cockapoo’s agonising death in a bid to alert other owners to the dangers of a killer disease.

Brave Vanessa Cunliffe, from Little Hulton, Manchester, has told how it took just 48 hours for her precious pet Max to go from an energetic dog to being terminally-ill on life support due to cutaneous and renal glomerular vasculopathy (CRGV), otherwise known as Alabama Rot.

Anderson Moores Veterinary Specialists in Winchester leads research into the disease, collates information on all cases and reports confirmed cases across the UK. Last week, Anderson Moores confirmed three new cases, including Max, which takes the total number of confirmed CRGV cases in the UK to 277, with 26 cases since the turn of the year.

Vanessa is still coming to terms with Max’s sudden death but has spoken out to highlight how deadly Alabama Rot can be and how prompt treatment may be essential.

She said: “It’s hard to describe how devastating and upsetting this whole experience has been and how quickly we lost our lovely boy Max.

“He was such a character, so lively and active and he brought so much joy into our lives but, unbelievably, he was gone in 48 hours.

“That’s why I want to highlight Max’s story in the hope we can save other dogs and their owners from enduring the same pain and misery we suffered.”

There is no known cause for CRGV, which typically starts with unexplained redness or sores on the skin, particularly on the paws or legs but occasionally on the body, face, tongue or mouth. Urgent treatment is vital in trying to combat the potentially fatal disease.

Vanessa said: “This is a killer disease and it kills very quickly, so I would urge anyone with concerns about their dog to get to their vets as fast as possible and ask about Alabama Rot before it’s too late.

“The first sign of a problem with Max was when he suddenly started limping. We checked his paws and joints but there was nothing obvious or visible to show what was wrong.

“There was only an area just above the pad of his foot where there was some wet fur which he had clearly been licking.

“We phoned our local vets and sent them a photo but, to be honest, you couldn’t see anything significant, just wet fur, so we weren’t too alarmed.

“His condition deteriorated dramatically overnight, though. He sleeps in our bedroom and he was awake most of the night and we could hear him licking his paw. It kept us awake and, in the morning, we discovered half his pad was missing.

“It was a real shock. One day it didn’t look as if anything was wrong, the next day half his paw was missing.

“Next, Max started being sick, then he got diarrhoea and there was blood in both, so we took him to our local vets.

“They thought it could be an intestinal infection caused by something toxic that he may have eaten so they started Max on a course of antibiotics.

“The trouble was he wasn’t eating and it was a struggle to get the antibiotics down him and for him to keep them down as he was still vomiting.

“Max then started having seizures and was getting worse and worse. We took him to an animal hospital in Bolton and they told us his kidneys were now failing him.

“Soon afterwards he was put onto life support, with the vets saying there was little chance of him getting better. It was all such a shock.”

David Walker, an American, RCVS and EBVS European specialist in small animal internal medicine, leads the team at Anderson Moores and is the UK’s foremost authority on the disease.

He said: “The cause of CRGV remains unknown so, unfortunately, it is very difficult to give specific advice about prevention.

“While there have been a number of cases since the start of the year, we’re advising dog owners across the country to remain calm but vigilant and seek advice from their local vets if their dog develops unexplained skin lesions.

“If a dog becomes affected by CRGV, the best chance of recovery probably lies with early and intensive veterinary care which may be best provided at a specialist facility such as Anderson Moores.

To find out more about CRGV, visit https://www.andersonmoores.com/owner/CRGV.php or search for Anderson Moores Veterinary Specialists on social media.