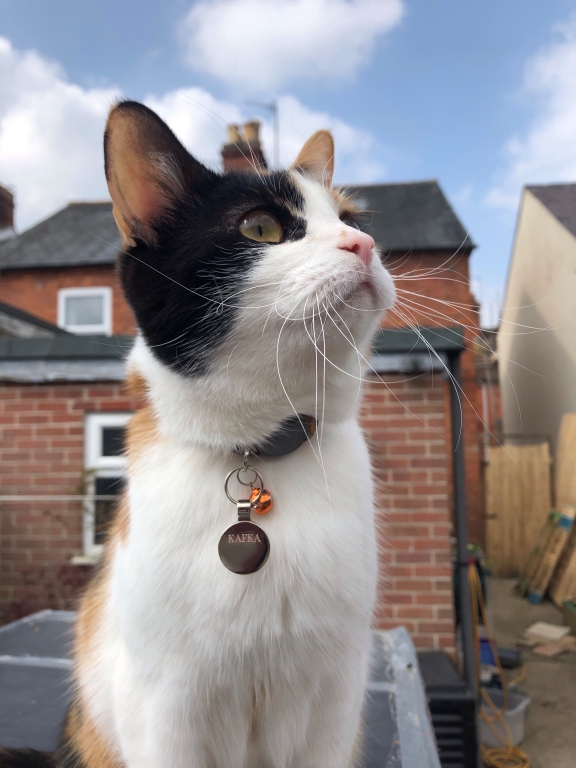 Kafka, a deaf one-year old cat with cerebellar hypoplasia, was referred to Eastcott when her owners took her in to see their local vet after they suspected she wasn’t able to follow the sign language she had come to understand so well.

Ida Gilbert, head of ophthalmology at Eastcott, which is part of Linnaeus, quickly noticed Kafka was developing progressive cataracts in both her eyes and required corrective surgery.

Ida said: “We always recommend that cataracts are seen quickly so they can be managed appropriately with anti-inflammatory medication and scheduled for surgery as soon as possible. Ignoring cataracts can lead to inflammation of the eye (uveitis) which can eventually lead to glaucoma and retinal detachment and in some cases may become inoperable.

“When Kafka came to us, she was not fully blind, but had progressive cataracts in her central axes, reducing her vision quite significantly.

“She was able to see moving objects or objects with a good contrast colour. She was better at tracking a toy moving along the floor, rather than a static toy, but was not able to see the owner’s sign language well. The reduced vision was also having a negative effect on her balance.

“The cataracts were immature in both eyes, with the cataract in the left eye being denser than the right eye. While the anterior parts of her lenses were clear, the cataracts were occupying most of the central axes. They were likely to get worse and cause inflammation in her eyes if not treated, which we naturally wanted to avoid.”

James said: “Kafka has always been a very happy, loving and personable cat, right from when she was born. Despite her physical differences, she has always enjoyed jumping and bouncing about everywhere and she really loves being outdoors with us.

“Her understanding of sign language has come leaps and bounds since she was born and she often treats us to some lovely tricks, knows the sign for food and comes running when you call her.

“At the start of this year, however, we noticed a few changes in her behaviour and also noticed there was a kind of white mistiness right in the middle of both her pupils, which seemed to be compromising her ability to follow our sign language. A trip to the local vet informed us that she may have cataracts in both eyes.

“We were referred to Eastcott Veterinary Referrals and got an appointment to be seen quite quickly. Due to restrictions, we were asked to stay outside the hospital and the ophthalmologist did a phone consultation with us, after which they came out and took Kafka in for her examination.

“We were invited in at a social distance and the veterinary team informed us Kafka needed double cataract surgery in order to avoid completely losing her vision due to progressive cataracts.”

James gave a glowing review of the expert team, who explained all the details of the procedure that was needed and provided an excellent level of care to Kafka.

“The team at Eastcott were exceptional and kept us informed and assured at every stage of the entire process.

“Kafka was so comfortable with the entire team at Eastcott and would very willingly allow them to examine her, which speaks volumes about the care at the practice.”

James concluded: “There is such a big difference to Kafka’s wellbeing ever since she’s had the surgery. After a few days of getting used to having a cone around her neck, we ventured outside and it was such a joy to see her chasing after ants again and running up to people who were far away to say hello. We cannot thank the team at Eastcott enough for helping us get Kafka her sight back.”