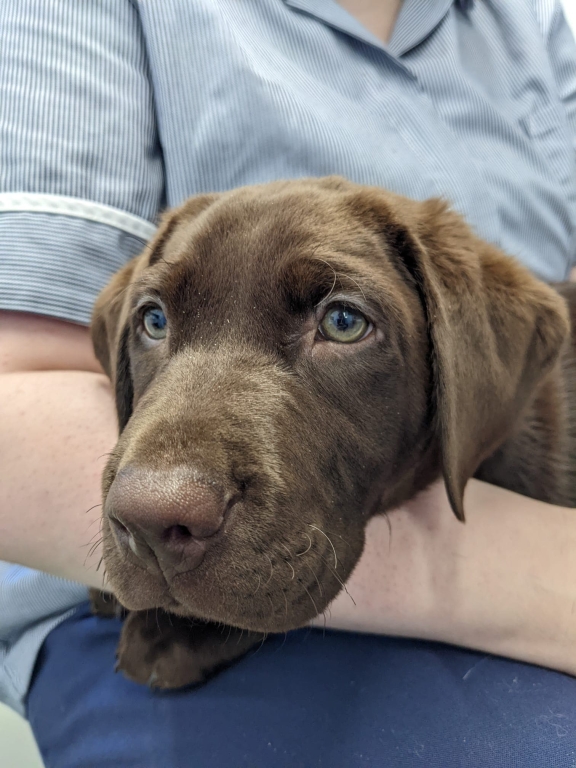 Stanley the Labrador, who was treated at Village Vet in Berkhamsted after swallowing a jagged piece of flint stone

An adorable young Labrador who couldn’t stop retching after swallowing a jagged piece of stone is none the worse for wear thanks to the swift intervention of a leading Berkhamsted vets.

Ten-week-old Stanley was rushed to Linnaeus-owned Village Vet after swallowing the sharp piece of flint stone while playing in the garden with his family.

Veterinary surgeon Lauren Emsden took charge of Stanley’s case and carried out an X-ray to diagnose the foreign body, which she then removed by carrying out surgery on his stomach.

Now Lauren is using Stanley’s case to warn other dog owners about the dangers of their pets swallowing sharp objects, particularly breeds which are notorious for trying to eat things they shouldn’t.

Lauren said: “We’re pleased to say Stanley’s issue was quite straightforward to deal with and had no complications.

“While Stanley’s retching was a common side effect, unusually he wasn’t sick at all and was an otherwise completely healthy and happy patient.

“However, it was a particularly nasty, jagged piece of stone which left untreated could have caused problems for Stanley further down the line.

“It’s why we’d always recommend that owners seek expert veterinary help if they’re worried their pet has swallowed something they shouldn’t have.

“Happily, Stanley’s owners brought him in quickly and after 24 hours in hospital and a week of rest at home, he’s back to his normal, bouncy self.”

Village Vet has 30 practices across London, Hertfordshire and Cambridgeshire. For more information, visit www.villagevet.co.uk or search for Village Vet on social media.